Who Are These Bozos? "Religious Group Attacks Religion in Healthcare" 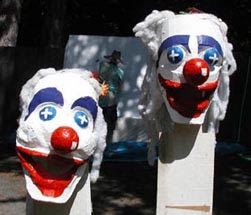 The following article reads like satire, but it's from Reuters, which doesn't do satire. Apparently, the "Religious Coalition for Reproductive Choice" thinks that religion should play no role in health care decisions. When you read the article, you'll wonder where they think religion should play a role. In a church, perhaps, but you gotta wonder even about that.

Notice the loaded terminology used throughout by the "Coalition" (and Reuters). Religious belief is interfering with personal rights. People with religious convictions are "imposing their points of view," which we know is always a no-no (unless it's your point of view). All 5 justices who voted against partial-birth abortion are Catholic men (not just Catholics, mind you, but also men - highly suspicious). Health care practitioners are exercising a "'so-called' religious or moral objection" (if it's only "so-called," then what is it really?). Women facing "problem pregnancies" should be able to exercise choice ("I'm pregnant. That's a problem. I think I'll have an abortion."). Courts should not interfere with "reproductive health" decisions (what the hell does abortion have to do with a woman's "health"?). And so on.

What's more ludicrous? That some people spout off this fatuous nonsense, or that one of the most respected news wires chooses to publish it?

Here's the article, if you haven't already had enough. And if you think I'm making all this up, here's the link to the original article:

WASHINGTON (Reuters) - A coalition of religious leaders took on the Catholic Church, the U.S. Supreme Court and the Bush administration on Tuesday with a plea to take religion out of health care in the United States.

They said last week's Supreme Court decision outlawing a certain type of abortion demonstrated that religious belief was interfering with personal rights and the U.S. health care system in general.

The group, calling itself the Religious Coalition for Reproductive Choice, said it planned to submit its proposals to other church groups and lobby Congress and state legislators.

"With the April 18 Supreme Court decision banning specific abortion procedures, concerns are being raised in religious communities about the ethics of denying these services," the group said in a statement.

"They are imposing their points of view," Barbara Kavadias, director of field services for the Religious Coalition for Reproductive Choice, told reporters in a telephone briefing.
She noted that the five Supreme Court justices on the majority in the 5-4 decision were all Catholic men -- Chief Justice John Roberts, Justice Anthony Kennedy, Justice Samuel Alito, Justice Clarence Thomas and Justice Antonin Scalia.

All were appointed by conservative Republican presidents who oppose abortion, including President George W. Bush.

The group also complained about Catholic-owned hospitals that refuse to sterilize women who ask for it, refuse to let doctors perform abortions and do not provide contraception.

"Doctors, pharmacists and nurses are also increasingly exercising a so-called 'religious or moral objection,' refusing to provide essential services and often leaving patients without other options," the group said in a statement.

CODIFYING RELIGION
"And now, to make it worse, the government is codifying these refusals, first through legislation and now with the recent Supreme Court decision, where five Catholic men decided that they could better determine what was moral and good than the physicians, women and families facing difficult, personal choices in problem pregnancies," it added.

"The threat comes from a few, but powerful, religions and a few ... powerful religious leaders who pretend to speak for all religions," said Larry Greenfield, executive minister of the American Baptist Churches of Metro Chicago.

"Health care decisions ought to be made freely, based on medical expertise and individual conscience," he added.

The group wrote up a series of guidelines and asked for all health care providers to implement them.

They include allowing doctors to use best medical practices, providing comprehensive counseling on sexual or reproductive health and an agreement to honor advance directives -- including "do not resuscitate" orders.

"Refusal to provide health care would be balanced by alternate service delivery so that no one would be victimized when another exercises his/her conscience," the guidelines read.
Marie Hilliard of the National Catholic Bioethics Center in Philadelphia said she had grave concerns about the report.

"There is no recognition of the true meaning of the separation of church and state, which mandates that the free exercise of religion, including that of the provider, be respected," she said.

"What we have tried to avoid is to be coercive ourselves," Greenfield said. "We have tried to allow for the freedom of conscience of every participant in the health care system."