There Was a Concert, Too 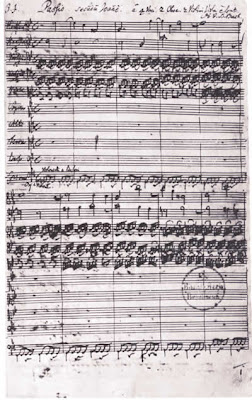 Had my car not been towed, the most memorable part of the weekend would have been the concert I mentioned earlier: the Atlanta Symphony and Chamber Chorus performing Bach's St. John Passion. What a nice way to spend a Saturday evening - to me, performances of Bach's longer choral works have the effect of being a worship service. The combination of Biblical texts, old hymns, and marvelous singing & playing can hardly be beat. It helped that I was in the first row, in the center, close enough to tell whether the soloists had trimmed their fingernails that morning. Being that close, the concert feels more immediate and personal to me, even if I can't see everyone further back on the stage.
So, this is Easter week and the St. John Passion is, of course, about the betrayal, trial, and death of Jesus. Here's one verse from a chorus in the work that I particularly like (the whole piece was performed in German, by the way; the English translation I give here is mostly the work of Robert Shaw, with a couple alterations by yours truly):

It’s from your bondage, Lord, alone,
That now our freedom flowers.
Your dungeon is our mercy-throne
And liberty is ours!
Had you not chosen a slave to be,
We’d all be slaves eternally.