How Islam Helps Us Understand Donald Trump (or is it the other way around?) 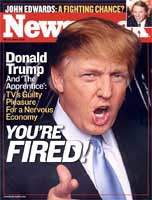 Saturday morning, I was streaming the BBC while shaving and heard a thought-provoking interview/discussion between John Humphrys and Tarik Ramadan. Humphrys is a reporter and news anchor. A former theist, he's doing interviews with a Christian, a Muslim, and a Jew and inviting them to convert him back to belief in God. Ramadan is a Muslim academic and theologian. We would probably call him a "moderate."

The interview itself (which you can listen to here) was fairly predictable, but it got more interesting when they discussed the question of who goes to Heaven. It's conceivable to Ramadan that the 9/11 hijackers may have gone to Heaven, because no one knows what thoughts might have gone through their minds in the last two minutes before their planes crashed (Ramadan does not, however, seem to endorse their violence). Asked whether he, himself, would go to Heaven, Ramadan answered, "I hope so." He explained that, as a sincere Muslim, you can only do your best and hope for the best. At the end of your life, God will make the determination where you go, based on how you've lived your life. You can hope for mercy.
These statements help me understand Muslim extremism and terrorism. If you can never be sure whether you're saved, you may feel the incessant need to demonstrate your zeal in the service of God. To bring His kingdom to earth by any means necessary. To fight evil relentlessly. Especially if your holy scriptures seem to encourage such behavior.
It reminds me of that piece-of-**** show, The Apprentice. I'll save my rants about the show until later (or never), but the relevant part is this: You work and work and work, and try and try and try, and at the end, you go to the Judgment Chamber and hope for the best while fearing the worst. In Islam, you "compete" against yourself, not against others, and more than one "winner" can ultimately enter Heaven, so the parallel isn't perfect. But the lack of assurance is there, as is not knowing your destiny until the last moment. (For the Muslim, however, there is one sure way into Heaven, and that is dying as a martyr. Isn't that encouraging.)
As for me, I'm thankful for Jesus, who opens the door, shows us the way, and gives us life (John 14.6). For the One who promises not to cast out those who come to Him (John 6.37) and who's committed to preserving His "sheep" through this life and into the next (John 10.28, 29). He is the martyr, not we (John 10.18). And because of all the above, we don't have to wait until the final judgment to know whether we belong to Him (1 John 5.11-15).
Our final point of encouragement? The confident assurance that when we see Jesus, whatever He may look like, he won't be sporting a Donald Trump comb-over.
Posted by Arnold at 09:14