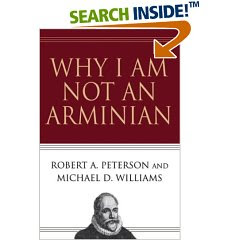 My April 16 blog about Islam and Donald Trump elicited a thoughtful reaction from a reader. He asks whether, on the issue of eternal security, there's a via media between Calvinism and Arminianism - whether, perhaps, those two views miss what Scripture is really saying.

Calvin, of course, is believed to have taught the doctrine of "Perseverance of the Saints." I say "believed to have taught," because no one on earth has actually read his complete works (smile). Some 50 years after his death, the Synod of Dordt formulated a response to an Arminian document. The five points they offered as contradictory to Arminianism have become known as the Five Points of Calvinism. In English, the five spell the acrostic TULIP, and the "P" stands for Perseverance of the Saints.

So let's take a look at Calvin's "P". Anyone care to comment on my reader's question?

I just read your post on Islam/Trump and it raised a question for me.

As I understand it, your theological convictions constitute an elegant hybrid: a practice-driven compilation of various strands of Protestantism. From the title of your blog it is clear that you are not trying to resolve all of the tensions within scripture into a neat systematic package. Though not the main point of your entry, your statements at the end of the entry about "security" prompted a few reflections (and a question). There seems to be two positions at play behind your words: eternal insecurity (Islam) and eternal security ('once saved always saved'- Baptist). Of course the latter could also be derived from a Calvinist view (we did not choose to become Xians and therefore cannot "unchoose"). I looked up the verses you cited and while they certainly overthrow the "insecurity" position, they do not seem to support (necessarily) the Baptist/Calvinist position. I wonder if you have considered a third position (which the verses also support): we respond to God's initiative/grace in becoming a Xian, and continue to respond to such grace throughout our lives, i.e., we (mysteriously) live in three temporal orientations at once: we have been saved, we are being saved, and we will be saved. But, since freewill is an essential part of our created human nature, we can reject God's grace through an extreme act of the will, thereby making "shipwreck" of our faith. Yet such a shipwreck is not easily achieved. (He is, after all, the hound of heaven!) While we live in the state of grace (i.e., we continue to respond to and cooperate with Christ's gracious initiative) we have "security."

Applying this at the personal level, I know that I am in a state of grace and that all of the verses that you cited apply to me. I do not need to prove my worthiness of X's love or hold on to the hope that somehow, just maybe, I may squeak into heaven. But at the same time (since I do not hold to the Baptist/Calvinist view of eternal security) I cannot know that I will not, at some point in the future, turn away from God and reject him. In that sense I do not have "eternal security." This was, of course, the main psychological (and perhaps pathological) issue for Luther. He could not believe that he was in a state of grace. He needed assurance not only for the present, but for the future as well. I spent the first 18 years of my life in the hell of eternal insecurity. I am very sympathetic to Luther's problem. These fears are what made Calvinism so very attractive to me (in addition to its rigor and coherence). Furthermore, given modern, Protestant Xianity's rejection of the sacraments as "means of grace," it is not surprising that most Evangelicals would cling to an "eternal security" position. I would very much like to hear more of your current thinking on this matter.