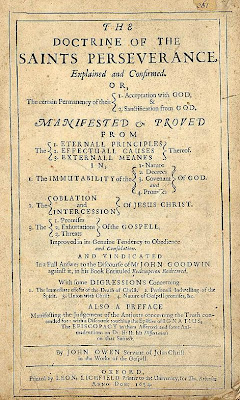 My previous entry, "Calvin's 'P'," raised questions from a reader about eternal security, also known as assurance of salvation. Several of you commented on his thoughts (thank you), and Gene actually made me laugh with his word pictures of Jesus holding an eraser. All comments contained excellent points. My good friend Boethius seemed to try to shift the focus to the question of private judgment vs. the authority of the (Roman Catholic) Church - a little odd, since he was the asker of the original question in the post! I'm sure he only did this, however, since he sees the questions as being linked.

Since this whole thing started out with him asking what I believe, I guess I should answer the question. What follows is hardly a Summa of my beliefs, but I intend for it to be a fair representation thereof.

Unless I've missed something, all of the commenters, including Boethius, would agree on the inspiration of the Bible and that our doctrines must not contradict the Word.

The difference is in epistemology. How do we know what we know? From the Church, from our hermeneutic, or from the Spirit leading us? In reality, I think it's some combination of the three - though I tend to think of "Church" as being somewhat synonymous with "historically orthodox beliefs." I'm always skeptical of anyone who shows up with novel doctrines that he believes he's just discovered after 2000 years of false Christianity. True divergence must always be suspect.

Admittedly, evangelical independence coupled with American individualism has led to some Protestants - leaders and otherwise - having some pretty wacky ideas. I won't attempt to defend Pat Robertson, Creflo Dollar, or Jim Jones. But in practice, it's not really happening that mainstream evangelicalism is coming up with novel theology all the time. In fact, our core beliefs are remarkably static.

That barely begins to address the question of "whose authority," but it's a start.

As for eternal security, I don't think this issue would be debated as hotly as it sometimes is if there were no ambiguity in the Scriptures. I don't believe that God is ambivalent on the subject, but His Word to us does not provide the indisputably clear answers that we would wish for.

I think you can make a case for salvation being "loseable," but I don't think that's the best answer. Here's why:
So that's a basic outline of what I think about these matters. Others have expressed these thoughts much better than I, and certainly more comprehensively. For example, John Owen, in 1654, took about 500 pages to examine Perseverance. Even his book's title(!) displays the multifariousness of the subject:

THE DOCTRINE OF THE SAINTS PERSEVERANCE, Explained and Confirmed.
OR, The certain Permanency of their 1. Acceptation with GOD, &
2. Sanctification from GOD. MANIFESTED & PROVED FROM The 1. ETERNALL PRINCIPLES 2. EFFECTUALL CAUSES 3. EXTERNALL MEANES Thereof. IN, 1. THE IMMUTABILITY of the 1. Nature 2. Decrees 3. Covenant and 4. Promises Of GOD. 2. The OBLATION and INTERCESSION Of JESUS CHRIST. 3. The 1. Promises 2. Exhortations 3. Threats Of The GOSPELL. Improved in its Genuine Tendency to Obedience and Consolation. AND VINDICATED In a Full Answer to the Discourse of Mr JOHN GOODWIN against it, in his Book Entituled Redemption Redeemed. With some DIGRESSIONS Concerning 1. The Immediate effects of the Death of Christ. 2. Personall Indwelling of the Spirit. 3. Union with Christ. 4. Nature of Gospell promises, &c. ALSO A PREFACE Manifesting the Judgement of the Antients concerning the Truth contended for: with a Discourse touching the Epistles of IGNATIUS; The EPISCOPACY in them Asserted; and some Animadversions on Dr H:H: his Dissertations on that Subject.
_________________________________________________________________ By
JOHN OWEN Servant of Jesus Christ in the Worke of the Gospell.