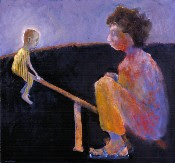 I chuckled this morning while reading the latest entry from Friendly Atheist. Although he and I are polar opposites in many of our beliefs, I enjoy hearing a bit about how the "other side" thinks.

At my church, where I help out with the young adults group, we have an imbalance in the ratio of men to women. For some reason, we do a great job of attracting women, but the men are a little more reluctant to attend, to commit, and to get into discipleship groups. Of course, we have some great guys who do all of the above, but numerically we're out of balance by a ratio of maybe 2:1.

So I was intrigued by Friendly Atheist's comments about his own groups, which are overwhelmingly male. What does it all mean? Is religion for women, and atheism for men? Is there something in our constitution that inclines us that way? Or does it have something to do with the "personality" of these groups and how they operate?

And how do we Christians, who believe that the Gospel of Jesus is for all persons - even males - get more guys to show up and to commit to follow Him? Maybe we should start raiding the atheist conventions?

At the AmericanAtheists convention, there were more women (at least ratio-wise) than I’ve seen at just about any other atheist/skeptic event. It was nice to have them there, but this convention, like all others, was short-lived.

It raisesthe question of why there are relatively few women in the secular movement. Why is it when I go to any atheist gathering (a convention, a local group, or a campus group), there are an overwhelming number of men?

What’s more, even the previous presidents for each organization (Madalyn Murray O’Hair, Bobbie Kirkhart, and Anne Nicol Gaylor, respectively) were women. O’Hair and Gaylor were also their groups’ founders.

(How many major Christian organizations can say all that?)

Plus, we have the always-awesome Skepchicks.

So where are the other secular women?

Here are some possible theories that were brainstormed at a bar with a group of guys over the weekend:

That’s a short list that needs to be expanded.

I’d argue for the first one. Imagine an Atheist Meetup event (or any situation, really) with 9834823 men and one woman. She will be hit on by damn near everyone. It’s frightening. And it changes the whole dynamic of how the guys act. If there was a more even split between the sexes, this wouldn’t be so bad, but we’re nowhere close to that. And if the girl is cute, we’re all in trouble.

What are the solutions to this problem? Besides trying to tell men to stop being so damn creepy, I’m not sure…

One suggestion that was mentioned was that we should ban women from attending the conferences altogether. They’ll get mad, organized, and show up to the events to boycott. And that way, we’ll have some more women at the conferences.

There must be a better way, though.