Between Friday and Sunday 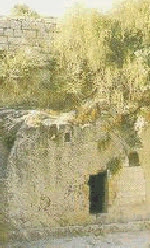 While at the concert last week of Bach’s St. John Passion, I had a new thought – new for me, that is. The text from the book of John says that Jesus was laid in “a new tomb, in which no one had ever been laid” (John 19.41). For some reason, it struck me that this is a parallel with his birth. He was born from a virgin womb, and He was buried in (and rose from) a virgin tomb. If there’s any theological significance to this, I haven’t yet figured out what it is. But it is a nice symmetry.


News You May Have Missed: Ahmadinejad, The Press, and Easter

When the 15 British sailors were released from Iran a couple days ago, the press uniformly reported that President Ahmadinejad said he was releasing his prisoners as an Easter gift. For example, the New York Times ran this AP version: "Irans's president, Mahmoud Ahmadinejad, said he had pardoned the sailors as an Easter holiday gift to the British people.”

That caught my eye, because I wouldn’t expect the president of Iran to care much about a Christian holiday.

What did he really say? MSNBC ran a longer version of his remarks, and they’re informative:

“Ahmadinejad said he had pardoned the sailors as a gift to the British people and to mark the birthday of Islam's Prophet Muhammed and Easter. On the occasion of the birthday of the great prophet (Muhammad) ... and for the occasion of the passing of Christ, I say the Islamic Republic government and the Iranian people -- with all powers and legal right to put the soldiers on trial -- forgave those 15."

“The occasion of the passing of Christ.” Would somebody please tell the press that the death of Jesus isn’t the definition of Easter?

(More about this story at GetReligion.org.)
Posted by Arnold at 07:52