The Fattest Nation on Earth 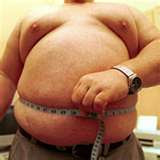 A couple weeks ago, I was in Orlando on business. I stayed in an expensive hotel on Disney property and took our business partners to dinner at an even more expensive Disney hotel. At both these hotels, we had occasion to visit the pool areas.

You know how in the movies, everyone by the pool is beautiful? How the men are gorgeous and the women are muscular? Well, real life at Disney is nothing like that. Poolside at Disney looks more like a convention of pears, grapes, and eggplants, but nobody's wearing a costume. Makes you wish they were.
No wonder people go to the Internet when they want to see beautiful people.
The Wall Street Journal recently quoted World Health Organization statistics, which show the following estimated obesity rates for people aged 15 years and over ("obese" = BMI >30):

American dominance is always comforting, but aside from American superiority, what conclusions can we draw from these statistics?

You can't really disagree with this. Statistics don't lie.