Islam Is Not Your Friend 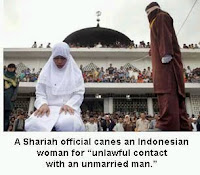 Tawfik Hamid was once a member of Jemaah Islamiya, an Islamist terrorist group led by Al-Qaeda's second in command. He now lives in the West and practices medicine.
On April 3, The Wall Street Journal ran a fascinating 1,000-word essay by him about what's wrong with Islam and what's wrong with the West's response to Islam. I've excerpted about 1/3 of the essay below, but I encourage you to read the whole thing at this link.

It is vital to grasp that traditional and even mainstream Islamic teaching accepts and promotes violence. Shariah, for example, allows apostates to be killed, permits beating women to discipline them, seeks to subjugate non-Muslims to Islam as dhimmis and justifies declaring war to do so. It exhorts good Muslims to exterminate the Jews before the "end of days." The near deafening silence of the Muslim majority against these barbaric practices is evidence enough that there is something fundamentally wrong.

The grave predicament we face in the Islamic world is the virtual lack of approved, theologically rigorous interpretations of Islam that clearly challenge the abusive aspects of Shariah …

…[It] is ironic and discouraging that many non-Muslim, Western intellectuals--who unceasingly claim to support human rights--have become obstacles to reforming Islam. Political correctness among Westerners obstructs unambiguous criticism of Shariah's inhumanity. They find socioeconomic or political excuses for Islamist terrorism such as poverty, colonialism, discrimination or the existence of Israel. What incentive is there for Muslims to demand reform when Western "progressives" pave the way for Islamist barbarity? Indeed, if the problem is not one of religious beliefs, it leaves one to wonder why Christians who live among Muslims under identical circumstances refrain from contributing to wide-scale, systematic campaigns of terror …

Western feminists duly fight in their home countries for equal pay and opportunity, but seemingly ignore, under a façade of cultural relativism, that large numbers of women in the Islamic world live under threat of beating, execution and genital mutilation, or cannot vote, drive cars and dress as they please.

Tolerance does not mean toleration of atrocities under the umbrella of relativism. It is time for all of us in the free world to face the reality of Salafi Islam or the reality of radical Islam will continue to face us.