What if Adam Had Said "No"? 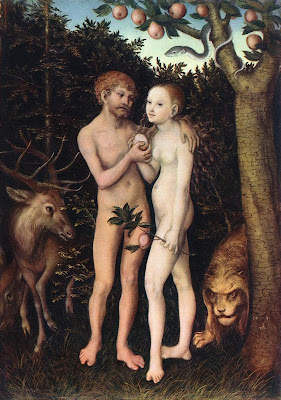 Yesterday's cartoon got me to thinking. I'm not a fan of speculative theology - when our coworkers and neighbors are going to Hell, who cares how many angels can dance on the head of a pin? - but here's my question, nevertheless . . .

Let's imagine that only Eve had eaten the forbidden fruit and Adam had said, "No, thanks, I'd rather obey God." What would that have meant for the Fall of Man? As the Apostle Paul wrote, "In Adam all die." Would we still be dead if only the female part of the ur-couple had sinned? Would Eve have been wiped out and Adam provided with a new, improved Eve 2.0? Or what?
Oddly enough, I've never seen this question addressed in the scores of commentaries on Genesis that I've read cover to cover. Have you?
(By the way, C.S. Lewis takes his own run at the Adam and Eve story in Perelandra, which is Book 2 of his space trilogy. In this case, the Satan figure keeps on tempting and the Eve figure keeps on resisting, until . . . Well, I guess you'll just need to read this excellent book to find out.)
.
Painting: "Adam and Eve," Lucas Cranach the Elder, 1533
Posted by Arnold at 08:26