Let's Hope the Pope is More Mature Than His Flock 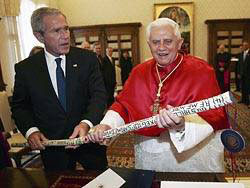 When President Bush visited Pope Benedict in Rome on June 9, he presented the Pope with a walking stick carved by a formerly homeless artist in Texas. On the stick are the 10 Commandments.

Now it turns out that certain shorts-in-a-knot Catholics, including a professor in St. Louis, are going on record as offended that the 10 Commandments are presented in the "Protestant" version, not the "Catholic" one. Equal to this transgression - and maybe worse - the President at least once called the Pope "sir" rather than "Your Holiness." You can read all about these faux pas and the backlash here.
To which I say, BFD. And to which I add, "Grow up and get a life."
If you didn't know, Catholics, Jews, and Protestants all agree that Exodus 20 has a list of "the 10 commandments," also known as the Decalogue. They all agree on the words of the commandments, but they group the phrases/commands in the list slightly differently - still always ending up with 10.
Bush is accused of a "religious offense" for handing over the Protestant version. Apparently, some Catholics think the Pope should only be exposed to Catholic art. I'd like to think he's robust enough to be exposed to American folk art without forsaking his faith. And for the record, if the Pope would like to give me an illuminated Bible from the Middle Ages, I'll be happy to receive it, even if it contains the Apocryphal books - even if it's only the Apocryphal books. I promise not to be offended.
As for the misplaced honorific, get over it. I doubt the Pope stayed awake that night mumbling to himself, "Sir!? I can't believe he called me sir!" Nor do I think he's going to start a holy war over this. I prefer to think he secretly wishes people would call him Joey, and I hope there's a person or two in his life who does just that.
Posted by Arnold at 00:31