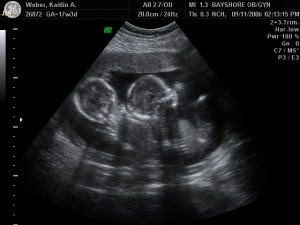 If you can read this GetReligion post without being repulsed and at least a little sick, then you deserve my admiration or pity. The Washington Post article it's mostly about discusses the murder of selected fetuses when the mother is carrying more than one at a time. Pregnant with 3, but only have room at home for 2 more? There are doctors who can help you with that.
It's astonishing to me that the Washington Post would run an article such as this, which hardly helps to forward the pro-choice agenda. Here's an excerpt that gives you an idea of what you're getting into:

Evans prepared two syringes, swabbed Emma with antiseptic, put the square-holed napkin on her stomach. Then he plunged one of the needles into Emma’s belly and began to work his way into position. He injected the potassium chloride, and B, the first fetus to go, went still.

“There’s no activity there,” he said, scrutinizing the screen. B was lying lengthwise in its little honeycomb chamber, no longer there and yet still there. It was impossible not to find the sight affecting. Here was a life that one minute was going to happen and now, because of its location, wasn’t. One minute, B was a fetus with a future stretching out before it: childhood, college, children, grandchildren, maybe. The next minute, that future had been deleted.

Evans plunged the second needle into Emma’s belly. “See the tip?” he said, showing the women where the tip of the needle was visible on the ultrasound screen. Even I could see it: a white spot hovering near the heart. D was moving. Evans started injecting. He went very slowly. “If you inject too fast, you blow the kid off your needle,” he explained.

If a nation ever deserved God's judgment, isn't it ours?
.
(Please read the whole GetReligion post here.)