Brownback Has a Brain 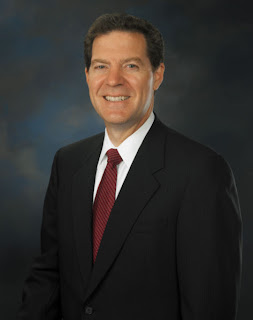 Sam Brownback's running for the Republican nomination for President. I don't know too much about his political positions, but what I know, I like. When's the last time you heard a presidential candidate speak (or write) so intelligently about something like the interplay of faith and science? I think he must have read the Pope's Regensburg address (the one that set off the Muslim rioting but was really about answering the question, "What has Athens to do with Jerusalem?" - in other words, "What has reason to do with faith?").

The original NY Times op-ed is here, or you can read it below in its entirety.

What I Think About Evolution
By SAM BROWNBACK
Published: May 31, 2007 Washington

IN our sound-bite political culture, it is unrealistic to expect that every complicated issue will be addressed with the nuance or subtlety it deserves. So I suppose I should not have been surprised earlier this month when, during the first Republican presidential debate, the candidates on stage were asked to raise their hands if they did not “believe” in evolution. As one of those who raised his hand, I think it would be helpful to discuss the issue in a bit more detail and with the seriousness it demands.

The premise behind the question seems to be that if one does not unhesitatingly assert belief in evolution, then one must necessarily believe that God created the world and everything in it in six 24-hour days. But limiting this question to a stark choice between evolution and creationism does a disservice to the complexity of the interaction between science, faith and reason.

The heart of the issue is that we cannot drive a wedge between faith and reason. I believe wholeheartedly that there cannot be any contradiction between the two. The scientific method, based on reason, seeks to discover truths about the nature of the created order and how it operates, whereas faith deals with spiritual truths. The truths of science and faith are complementary: they deal with very different questions, but they do not contradict each other because the spiritual order and the material order were created by the same God.

People of faith should be rational, using the gift of reason that God has given us. At the same time, reason itself cannot answer every question. Faith seeks to purify reason so that we might be able to see more clearly, not less. Faith supplements the scientific method by providing an understanding of values, meaning and purpose. More than that, faith — not science — can help us understand the breadth of human suffering or the depth of human love. Faith and science should go together, not be driven apart.

The question of evolution goes to the heart of this issue. If belief in evolution means simply assenting to microevolution, small changes over time within a species, I am happy to say, as I have in the past, that I believe it to be true. If, on the other hand, it means assenting to an exclusively materialistic, deterministic vision of the world that holds no place for a guiding intelligence, then I reject it.

There is no one single theory of evolution, as proponents of punctuated equilibrium and classical Darwinism continue to feud today. Many questions raised by evolutionary theory — like whether man has a unique place in the world or is merely the chance product of random mutations — go beyond empirical science and are better addressed in the realm of philosophy or theology.

The most passionate advocates of evolutionary theory offer a vision of man as a kind of historical accident. That being the case, many believers — myself included — reject arguments for evolution that dismiss the possibility of divine causality.

Ultimately, on the question of the origins of the universe, I am happy to let the facts speak for themselves. There are aspects of evolutionary biology that reveal a great deal about the nature of the world, like the small changes that take place within a species. Yet I believe, as do many biologists and people of faith, that the process of creation — and indeed life today — is sustained by the hand of God in a manner known fully only to him. It does not strike me as anti-science or anti-reason to question the philosophical presuppositions behind theories offered by scientists who, in excluding the possibility of design or purpose, venture far beyond their realm of empirical science.

Biologists will have their debates about man’s origins, but people of faith can also bring a great deal to the table. For this reason, I oppose the exclusion of either faith or reason from the discussion. An attempt by either to seek a monopoly on these questions would be wrong-headed. As science continues to explore the details of man’s origin, faith can do its part as well. The fundamental question for me is how these theories affect our understanding of the human person.

The unique and special place of each and every person in creation is a fundamental truth that must be safeguarded. I am wary of any theory that seeks to undermine man’s essential dignity and unique and intended place in the cosmos. I firmly believe that each human person, regardless of circumstance, was willed into being and made for a purpose.

While no stone should be left unturned in seeking to discover the nature of man’s origins, we can say with conviction that we know with certainty at least part of the outcome. Man was not an accident and reflects an image and likeness unique in the created order. Those aspects of evolutionary theory compatible with this truth are a welcome addition to human knowledge. Aspects of these theories that undermine this truth, however, should be firmly rejected as an atheistic theology posing as science.

Without hesitation, I am happy to raise my hand to that.

Sam Brownback is a Republican senator from Kansas.