Kong Fights Godzilla, and The Winner Is . . . 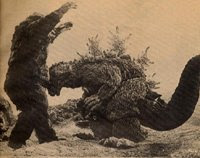 Well, the 6th and final installment of the web debate between Christopher Hitchens and Douglas Wilson has now been posted on the Christianity Today website.
Contrary to my earlier predictions, this has been a surprisingly "flat" debate. Considering that there were only one or two posts per week, I would have expected a higher level of discussion, especially out of Wilson. Is this really the best he could do? With all his acolytes, disciples, and hangers-on? I feel that half of my friends could have debated Hitchens as well - in substance, if not in style.
Most tellingly, the debate never seemed to stay on topic for long, which was supposed to be, "Is Christianity Good For The World?" Instead, it devolved (I use that word on purpose) into the standard Atheist v. Christian Theist debate. Been there, done that.
I still like Wilson's thinking on a lot of issues, but this feels like a missed opportunity.
Posted by Arnold at 06:59