Who Separated Church and State? 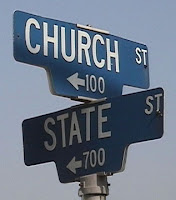 Hint: It wasn't the ACLU.
In a provocative but eminently sensible essay, Lee Harris says that one person pretty much singlehandedly made the separation.
Here's a brief excerpt:

Imagine going to a Roman citizen circa 33 AD and asking him to explain the dividing line between the Roman state and the Roman religion. He would scratch his head in puzzlement. For the Roman, the state was the church, and the church was the state: the same entity performed both civic functions and religious duties. But if you had gone to Galilee at about the same time, you might have encountered a man who taught another doctrine -- a revolutionary one.

You can read the entire article here, which will take you about 10 minutes. Although not a comprehensive treatment, it may change forever how you think about this subject.
Posted by Arnold at 09:43