Art Worth Getting Excited About 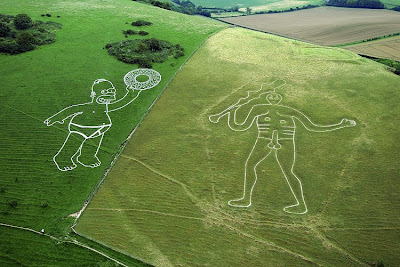 Art appreciation quiz: Which figure is over 300 years old, and which was placed on the hillside within the last week or two? Which is likely to be there 300 years from now?
From Spiegel Online:

D'Oh! A painting of Homer Simpson next to the 17th century giant carved into the hillside at Cerne Abbas, Dorset, in the United Kingdom has angered Pagans who regard the giant as a spiritual icon. The Simpson painting, showing Homer in his y-front underwear wielding a donut, was cooked up by the publicity team for the new film "The Simpsons," which opens in European theaters next week. Created using water-soluble paint, its creators said it would dissolve with the next rain. "It's very disrespectful and not at all aesthetically pleasing," Ann Bryn-Evans of the Pagan Federation told London's Independent newspaper. "I'm amazed they got permission to do something so ridiculous. We were hoping for some dry weather, but I think I have changed my mind. We'll be doing some rain magic to bring the rain and wash it away."

You can read more about the Cerne Abbas Giant here.