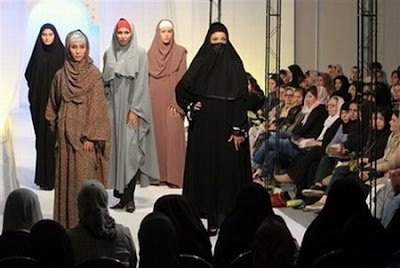 What kind of a place is it where women get rounded up on the street for having too much hair peeking out from under their scarves? Where they get taken to jail because their jackets are too short? Where the police are forbidden to tell anyone their own names? (Hint: It's the same kind of place where the president denies that the Holocaust ever happened.)
Iran, like many Muslim countries, is being run on a false concept of human nature and human dignity. Voldemort would be right at home running such a society.
From Agence France Presse:

It all starts with one simple sentence, spoken almost in a whisper, but which has a thunderous effect.

A female police officer deployed in Tehran's latest moral crackdown tells a woman that her manto (overcoat) is too short and infringes Iranian Islamic dress rules.

"Azizam (my dear), good afternoon, if possible could we have a friendly chat, please allow us to have a small chat," the officer, a graduate of Tehran's police academy, tells the young woman.

Some are just let go there, but others are escorted to waiting minibuses with dark black tinted window panes and labelled "Guidance Patrol."

A girl in a short white manto whose long hair was tumbling out the front of her headscarf is taken by the police to one of the minibuses on Vanak Square in central Tehran -- an unexpected and unhappy end to her shopping trip.

Another arrested woman is already inside the bus. She begins to cry. "I promise, I promise!"

And the minibus doors slam shut.

Tehran's police have said they are operating a three stage process in implementing the new wave of a crackdown on dress deemed to be unIslamic, which started with some intensity on Monday afternoon.

First, women are given a verbal warning on the street. If the problem is not resolved there, they are taken to the police station for "guidance" and to sign a vow not to repeat the offence. Should this be unsuccessful, their case is handed to the judiciary.

"Sure my manto is short, but there are many others whose clothes are more seductive than mine and they walking by without any punishment," one of the arrested girls in the minibus complained bitterly.

The arrested women will now go to a "centre for combating vice".

Their parents will be phoned and they will bring a longer coat and fuller headscarf for their daughters. If the young women sign the pledge they will then be released.

"We want our words to have an effect on people," a female Iranian police officer, who by law was not allowed to give her name, told AFP before being dispatched to take part in the crackdown.

"Our method is through guidance and via words. We do not face an instance that prompts us to be physical. We do not have any bats or sprays, in the toughest instances we may grab her hand and 'guide' her to the minibus," she said.

"I am doing this it as it is my duty and my job is supported by the religious teachings," another women clad in the black chador uniform of Tehran's female police added.

A girl confronted by the female police for having overly short trousers and transparent stockings apologizes.

Not everything goes so smoothly.

One young passer-by rounds on the police for devoting such resources to moral crackdowns rather than other social problems as the minibus -- now filled with "badly veiled" women -- speeds away to the police station.

"Shame on you, look what you've done! The people's problem is not this, go fix your traffic situation, people are stuck in traffic for hours, go fix other real problems," she shrieks.

There was already considerable controversy inside Iran when the first stage of the "plan to increase security in society" was launched in April.

Many conservatives have applauded the drive, but moderates have publicly questioned whether Iran would be better off tackling poverty and crime rather than slack dressing.

Just before the new crackdown started, popular television host Farzad Hasani grilled Tehran's police chief Ahmad Reza Radan about the drive on his talk show, accusing the police of "not differentiating between people and thugs."

An old woman in a black chador in Vanak Qquare echoed the sentiment. "Our youth have no peace of mind. They are afraid to go out, they are afraid that if they go out they will be taken to the police. Aren't they saying that there is freedom?"