Did You Hear the One About the Episcopal Priest Who Decided to be a Muslim, Too? 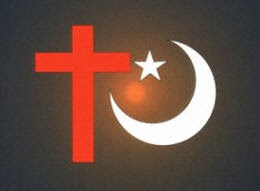 So, this Episcopal priest in Seattle walks into a mosque and says, "Hey, I want to be a Muslim, too..."
This joke-in-the-making is actually a true story. The Rev. Anne Holmes Redding decided to be both Muslim and Christian, "100% of each," according to her. The local bishop in Olympia, WA (near Seattle) said - really! - that it was fine and that it opened up exciting possibilities for interfaith dialogue. But the bishop of Rhode Island, where she was consecrated, saw it differently and suspended her for a year of study and reflection. Kind of reminds me of the parent who sends little Annie to her room to "Think about what you've done."
Rev. Redding's conversion was announced in the diocese's June newsletter. It's a rather approving article, as you'll see (p. 9).
The First Things blog has an excellent summary of the matter and the inescapable theological issues it raises. It's worth the read.
I'm glad to read that there's someone in the Episcopal church who's holding this woman accountable. Now, if they would just tackle the heretic Bishop John Shelby Spong. But we'll save him for a future post.
Posted by Arnold at 10:03