Twittering Your Life Away 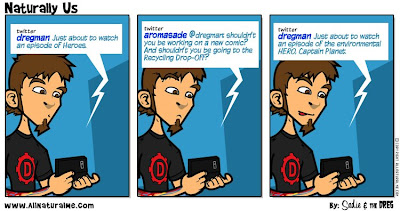 (Click on the cartoon for a larger version.)
.
Every generation comes up with new ways to waste its members' lives. Watching television and cruising used to be it, though cruising's imperilled by high gas prices. Television is still quite with us, even though total viewership is down: witness the obsession with "Lost" or "24" or "The Office" or "Heroes." More recently, IMing (AOL Instant Messenger and the like) found ways to consume hours of peoples' lives in frivolity; it's still around, though apparently not as compelling as it once was. Computer/video games steal some people's lives, but the waste-monger getting the most attention these days is social networking.
Of all the social networking media, I find Twitter particularly interesting, in that most tweeters seem to think other people should be endlessly fascinated with the minutiae of their daily lives. It's narcissism, isn't it?...though most people prefer to call it "keeping in touch." Narcissism for the sender, distraction for both the sender and the receiver (a-musement, "not thinking"), and at the end you have a vaporous pile of ethereal nothing. Maybe someday, Twitter will turn into something useful. It's not there yet.
I came across this blog entry today. Although this guy calls himself extreme for having a dozen ways of reporting on himself, he seems representative of the spirit of the age:

If you are like me then you have at least one or two social networking accounts.... I may have taken it to extremes but I eventually went and got a FriendFeed account which tied most of them together. By doing this when I update my Friend Feed status I update my Facebook and Twitter accounts. but here is where it gets tricky. If I update my Flickr, youtube, my Google Talk status, one of the many blogs, or my 73s.org accounts, Friendfeed will pull from them and publish the update out to the others. As these updates get pushed to the Twitter account my Live Spaces account will post that update as well. Another cool thing is if I share an item from Google Reader, it will also push that and any comments to Friend Feed, and then back out from there. Duplicate items can happen, and I am still working on that, but all in all it is easier to really only manage one or two instead of the 12 I once had to cut and paste too.

Now If I could get the Zune Social updates to replicate as well, I would not have to update anything separately.

Do I really need to let the whole world what I am having for dinner? If you have to ask then you just don't understand. It is cool to be able to let you friends and family know what is going on, and to share articles that have caught my eye. Do I have to? no not really, but it is cool, and I am still having fun with it. When it becomes a chore then I may have stop. Until then, keep connected, and share what tips you have for linking your social networking in the comments.

I don't think of myself as a Luddite, and I'm not opposed to electronic communication. I'd have trouble living without e-mail, and obviously, I keep a blog, which I admittedly hope a lot of people will read. But I really don't think anyone cares which type of Trader Joe's cereal I ate this morning, nor whether I put yogurt or milk on it, nor whether I ate it out of a cup or a bowl, nor whether I was sitting in the kitchen or out on the screened porch when I consumed it. If that's the level of detail you want from your friends, then I think you need to get a life.
Posted by Arnold at 15:27