The Law of Unintended Consequences: John Eldredge and Mexican Decapitations 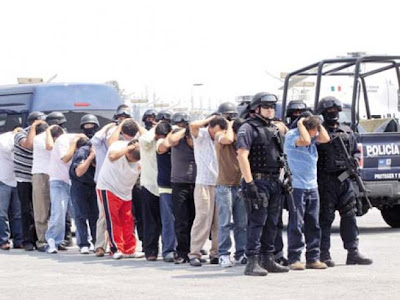 Everyone who knows me knows that I'm no fan of John Eldredge's theology. But for all the critical things I've said about him, I never would have predicted that a "faith-based" Mexican drug cartel would use his books as texts...and cetainly not a cartel that carries out massacres by separating their victims' bodies from their heads.
But that appears to be the case. Joseph Michael Reynolds reports on his blog that, "La Familia Michoacana was all over the news out of Mexico last week. In President Calderon’s home state of Michoacan, federales carted off ten mayors and twenty other local officials who were allegedly under the control of La Familia, an ambitious cartel often described as a 'pseudo-evangelical cult.'” Reynolds goes on to say:

[An] internal intelligence report on La Familia from the Mexican justice department surfaced in Milenio, bringing the news that the faith-based cartel grounds its indoctrination program on the writings of macho Christian author and veteran Focus On The Family senior fellow John Eldredge, who now heads Ransomed Hearts Ministries in Colorado Springs.

There are four separate references to Eldredge in the Mexican intelligence memo on La Familia. The cartel has conducted a three-year recruitment and PR campaign across Michoacan featuring thousands of billboards and banderas carrying their evangelical message and warnings. La Familia is known for tagging its executions and other mayhem as “la divina justica”–divine justice.

The Daily Kos has also picked up on this story. The Milenio article referenced looks very informative, but my Spanish is horrible, so I'll have to leave that to someone else.
.
If you're going to write books, it's great to have readers, but these must be fans that John Eldredge would rather not have. I've heard plenty of stories about people doing stupid things after reading his books; this is beyond all that I would have imagined.
.
(If you're feeling a need to see La Familia's handiwork, there's a photo on Reynolds' blog.)
Posted by Arnold at 09:08