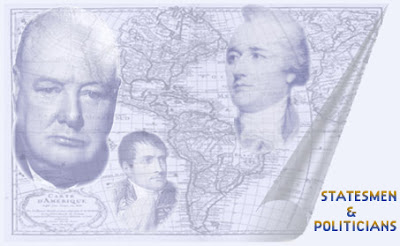 I've been going light on the political blogs lately, more out of cynicism than lack of interest. But I would like to share this quote I came across. It's from Henry Kissinger, who certainly has his share of detractors, but I think he accurately describes what the problem is in politics today:

The great statesmen of the past saw themselves as heroes who took on the burden of their societies' painful journey from the familiar to the as yet unknown. The modern politician is less interested in being a hero than a superstar. Heroes walk alone; stars derive their status from approbation. Heroes are defined by inner values; stars by consensus. When a candidate's views are forged in focus groups and ratified by television anchorpersons, insecurity and superficiality become congenital.

Who are the statesmen of today?
Posted by Arnold at 09:42