Someone's Gonna Pay For This 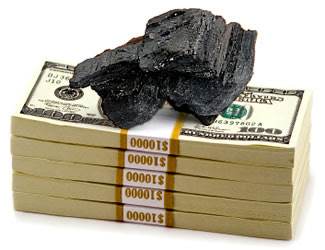 In the spirit of yesterday's post about the difference between politicians and statesmen, I offer a current example of how politicians aren't leveling with us, and instead are telling us what we want to hear. But eventually, the truth will get out, and then it will sink in, ... and then we'll get soaked.
.
This comes from a "Special Report on Business in America" in The Economist:

The best way to curb global warming would be a carbon tax. The money raised could be divided up among citizens or used to repay the national debt. A tax on carbon dioxide (CO2) would give everyone an incentive to emit less of it. It would be simple, direct and transparent. For these reasons, it will never happen in America.

Frank talk about energy policy is rare. Politicians hate to admit that anything they plan to do will cause pain to any voter. During the election campaign, both Barack Obama and John McCain proposed a cap-and-trade system for curbing CO2 emissions, not because it would work better than a carbon tax but because it did not have the word “tax” in its name. Both candidates also gave the impression that their green policies would yield huge benefits while imposing no costs. A shift to alternative energy, they agreed, would not only check global warming but also create millions of green jobs and help break America’s dependence on foreign oil.

Neither dwelt on the fact that cap-and-trade will raise energy prices, that subsidies for renewable energy will have to be paid for, or that both policies will destroy jobs as well as creating them, while probably cutting growth. The Congressional Budget Office estimates that a 15% cut in CO2 emissions will cost the average American household $1,600 a year. If politicians pretend they can save the planet at no cost, they risk a backlash when people realise they were fibbing.

If we're going to address global warming (or climate change, or whatever it's called this week), we need to understand the cost, and we need to compare the cost with the benefit. So far, no one proposing legislation seems to be doing that.
If you'd like to read the entire article, it's here.
Posted by Arnold at 14:58