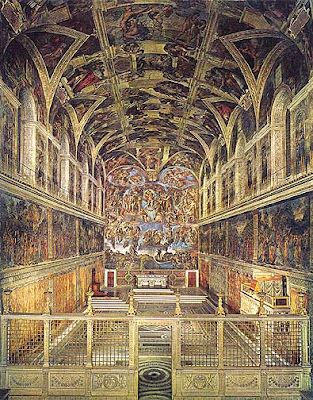 I've been critical of Twitter for what seems to me incorrigible frivolity (and narcissism). Who would have thought the Sistine Chapel would be similarly categorized by its painter?
.
Michelangelo Buonarroti (1475-1564) was unquestionably one of the greatest artists ever. People still flock to see his works, many of which have become iconic: La Pieta, David, God giving life to Adam, and the entire Sistine Chapel (pictured above). I've been blessed to see these works "live," and they live up to their billing. If anyone spent his life in worthwhile endeavor, it was Michelangelo. And yet, this is what he reportedly wrote toward the end of his life:

So now from this mad passion
which made me take art for an idol and a king,
I have learned the burden of error that it bore
and what misfortunes spring from man's desire.
The world's frivolities have robbed me of the time
that I was given for reflecting upon God.
(Credited to Michelangelo...source unknown.)
.
"Robbed of the time that I was given for reflecting on God." My friend David recently blogged on the importance of silence in one's life. I've had a few posts on the subject, myself. We need times of being alone with God. We weren't built to be led through cacophany; it causes us to confuse gods with God and makes it hard to identify our idols.
.
Serving those idols, rather than reflecting on God and living in light of eternity, can never be anything other than frivolity in God's economy. As much as I hate to call Michelangelo's awe-inspiring works the act of a frivolous idolater, that's what he apparently called them, himself. As beautiful an evocation of the Eternal One as they may be, they were never the Real Thing.
Posted by Arnold at 10:07