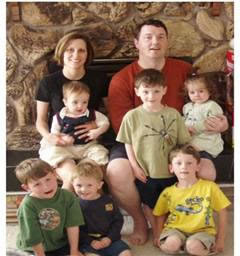 If you picked 100 adults out of the population who attended their house of worship nearly every week or more often, they would have 223 children among them, on average, according to the 2006 General Social Survey. Among 100 people who attended less than once per year or never, you would find just 158 kids. This 41% fertility gap between religious and secular people is especially meaningful because people tend to worship more or less like their parents. According to data collected in 1999 by Gallup, 60% of adults who were taken to church at least once per month as children grew up to attend at least this often; only 15% stopped attending as adults.

The demographic implications are even more profound for the political left, where a disproportionate number of secularists are located. Religious people who call themselves politically "conservative" or "very conservative" are having, on average, an astounding 78% more kids than secular liberals. Studies show that people are even more likely to vote like their parents than they are to worship like them. The secular left, therefore, has to rely on the tough slog of bringing people from the political and religious middle over to their views. The religious right simply has to keep having lots of babies.

- Arthur C. Brooks (professor at Syracuse University's school of public affairs and a visiting scholar at the American Enterprise Institute)
Posted by Arnold at 09:53