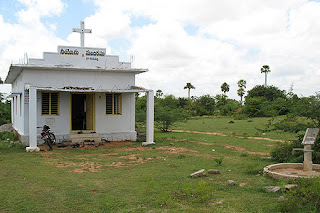 The Dalits of India have been receiving a fair amount of press in the last couple years. Some Christians have taken them up as a cause.
Dalits are not an ethnic group; rather, they are a sociological group (caste/class) that used to be generally referred to as the "untouchables." There are about 130 million of them in India.
Some of those 130 million are converts to Christianity. But their conversions lead to a form of persecution, and many are consequently hiding their faith. Here are some excerpts from a September 19 Wall Street Journal article describing the situation. I've cut out a lot of the article in order to keep the focus on the point that stood out to me:

MEDIPALLY, India - Every Sunday, women and children gather to pray in a tiny, whitewashed church on the edge of this southern Indian village, sitting cross-legged on blue plastic sheets as they sing Christian hymns.

The men don't dare to come. "If they are seen in the church, the officials will be informed," says Vatipally Aharon, Medipally's Baptist pastor.

Almost all the Christians here -- and the overwhelming majority across India -- hail from the so-called Dalit community, the former "untouchables" relegated to the bottom of the Hindu caste hierarchy. Under India's constitution, Dalits are entitled to affirmative-action benefits, including 15% of all federal government jobs and admissions in government-funded universities. That provides the country's most downtrodden with a way to escape their traditional occupations such as emptying village latrines, burying cow carcasses, and tanning animal hides.

But there is a catch: Any Dalit caught abandoning Hinduism for Christianity or Islam loses these privileges, and can be fired from jobs gained under the quota. The rules are enforced by vigilant local officials who keep a close eye on villagers' comings and goings.

But with India's expanding economy offering unprecedented opportunities for social and economic advancement, a great many Dalits are now turning to Christianity, attracted by benefits like education and health care that are sometimes offered by Western-funded congregations. This allows them to seek opportunities beyond the government sector, in the booming information-technology and services industries that put a premium on the Westernized outlook and English-language skills.

Much to the dismay of Hindu nationalist groups, the number of India's secret Christians has climbed in recent years to an estimated 25 million people, about the size of the officially registered Christian population.

The gains among secret Christians come despite the obvious risks: Affirmative-action benefits often mean the difference between grinding poverty and a glimmer of hope for better life.

A lanky 30-year-old with a trimmed mustache, Venkatesh Gunti was born into a Dalit household here in Medipally, a cluster of pastel-colored homes set in the rolling green hills of Andhra Pradesh state. Since his teenage years, Mr. Gunti frequently prayed in the village's Zion church, established by South African missionaries. Three years ago, he found a prized job that would have allowed him to escape the misery of rural life -- as a handyman in a government college in the town of Bhongir. Zoologist Mukesh Kumar says he was denied a job because he converted to Islam.
The job was reserved for a Dalit, and Mr. Gunti had to produce a "scheduled caste" certificate -- something he believed would be a mere formality.

But when Mr. Gunti applied for it at the local government revenue collection office, the clerk, Mr. Gunti recalls, refused to issue the document. According to reports filed by the village secretary, Mr. Gunti was a regular churchgoer and therefore no longer qualified for "scheduled caste" status. He didn't get the job and had to stay in the village, eking out a living as a manual laborer.

To gain back the affirmative-action benefits, Mr. Gunti says he had to pretend that he had reverted to Hinduism, participating in a Hindu religious festival when he knew that the village secretary was watching. Last year, the subterfuge finally worked, and Mr. Gunti was reclassified as a member of the "scheduled caste." He says he won't partake in any more Hindu rituals, but will also steer clear of the church. Mr. Gunti has yet to find a new job.

Questioned about the case, Raghu Rama Rao, Medipally's village secretary, explains that he has no choice. "This is the law -- if we'll come to know they go to church, we'll have to make an inquiry and submit a report," Mr. Rao says in his home, its outer wall sporting a poster for a Hindu nationalist organization. Mr. Rao adds that he's already showing kindness by reporting only the active churchgoers, and leaving alone those believed Christian Dalits who do not openly flaunt their faith.

Such thorough enforcement means that secret lives have to be lived throughout India's society. "If they ever find out I'm a Christian, I will lose my position, no question about it," says a Dalit schoolteacher who behaves as a Hindu when he teaches in a state school near Medipally but decorates his Hyderabad apartment with pictures of Jesus and the Virgin Mary.

"The government is forcing us to lie," echoes Prasadarao Yadavalli, a 48-year-old official in Andhra Pradesh's state bureaucracy who rose to his post thanks to Dalit quotas while hiding his Christian faith. Mr. Yadavalli says he has decided to finally come out this year, as he could no longer maintain this double life: "Whatever the consequences, God will take care of us." . . .

This bothers me. Not belonging to the Joel Osteen School of Happy Christianity, I tend to think that persecution is a natural consequence of proclaiming faith in Jesus and that steadfastness in suffering/persecution is a sign of true faith. Our American culture is an aberration, in that not many of us have to suffer for our faith in Jesus - certainly not in the way some New Testament believers did.
It's easy for me to criticize the Dalits, because I'm not in their shoes (or their bare feet). But I am sincere in my hope that if I have to choose between Jesus and a job, then I'll choose Jesus. Otherwise, my faith will be shown to have been nothing more than a faith of convenience. . . and thus, no faith at all.
Posted by Arnold at 13:44