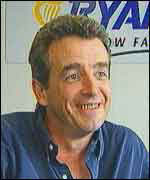 Should we feel sort of bad when we fly somewhere? Don't airplanes add to the global warming problem?
Michael O'Leary is CEO of Ryanair, the Ireland-based low-fare airline. He's known for being outspoken, and when he talks about global warming, he remains true to form. Here's an excerpt from an interview with him that was printed in the September 15-16, 2007 Wall Street Journal:

Mr. O'Leary's low opinion of his own industry, though, is nothing compared to his outright disdain for those who regulate air travel -- particularly when it's done in the name of the environment. Mention airlines and carbon dioxide in the same sentence, and he begins peppering his language with four-letter words.

Earlier this year, before becoming Britain's prime minister, Gordon Brown raised taxes on air travel to and from the U.K. The then-Treasury chief's stated purpose was fighting climate change. Mr. O'Leary, whose airline serves more than a dozen British airports, demurs: "He just raised taxes on airlines. It has [bleep]-all to do with climate change! We've written several letters . . . to the Treasury, asking what the money's going to be spent on. We still haven't gotten a reply.

"This is the problem with all this environmental claptrap . . . it's a convenient excuse for politicians to just start taxing people. Some of these guilt-laden, middle-class liberals think it's somehow good: 'Oh, that's my contribution to the environment.' It's not. You're just being robbed -- it's just highway [bleeping] robbery."

Airlines have become an enormous target for global-warming doomsayers. Last month, campaigners staged a nine-day protest outside London's Heathrow airport, hoping to discourage summer vacationers from flying. Mr. O'Leary points out that air transport accounts for only 2% of carbon dioxide emissions world-wide -- "It's less than marine transport, and yet I don't see anyone [saying], you know, 'Let's tax the [bleep] out of the ferries.'"

Mr. O'Leary assigns further blame to "the chattering bloody classes . . . or what I call the liberal, Guardian [newspaper] readers -- they're all buying SUVs to drive around the streets of London. And there's this huge disconnect between their stated passion for or care for the environment and what they actually do. They all want to buy kiwis and kumquats in the supermarket on Saturday. They're flown in from New Zealand for chrissakes! They're the equivalent of, you know, environmental nuclear bombs! But nobody says, 'Let's ban the kiwi fruits.'"

I guess this means his airline won't be selling carbon footprint offsets with their tickets.
Posted by Arnold at 10:52