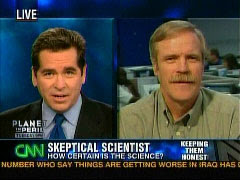 Little known fact: Al Gore was not the sole recipient of this year's Nobel Peace Prize. He was the co-recipient with the U.N.'s Intergovernmental Panel on Climate Change.
John Christy is a member of that panel and was interviewed on by Miles O'Brien on CNN after the award was announced. Here's a transcript of the October 19 interview, as provided by mrc.org . I bolded some sections for emphasis - and quick reading if you're in a hurry:

O'BRIEN: But I'll tell you who's not laughing, the critics who accuse Gore of being an alarmist, who say global warming is not a catastrophe. One of them is, ironically, one of the scientists who shares a piece of the Nobel Peace Prize with Gore, former NASA scientist John Christy, joining from us Huntsville, Alabama. Dr. Christy, good to have you with us.

O'BRIEN: I assume you're not happy about sharing this award with Al Gore. You going to renounce it in some way?

CHRISTY: Well, as a scientist at the University of Alabama in Huntsville, I always thought that, and I may sound like the Grinch who stole Christmas here, that prizes were given for performance, and not for promotional activities. And when I look at the world, I see that the carbon dioxide rate is increasing, and energy demand, of course, is increasing. And that's because, without energy, life is brutal and short. So I don't see very much effect in trying to scare people into not using energy when it is the very basis of how we can live in our society.

O'BRIEN: So what about the movie [An Inconvenient Truth] do you take issue with, then, Dr. Christy?

CHRISTY: Well, there's any number of things. I suppose, fundamentally, it's the fact that someone is speaking about a science that I've been very heavily involved in and have labored so hard in, and been humiliated by, in the sense that the climate is so difficult to understand, Mother Nature is so complex, and so the uncertainties are great, and then to hear someone speak with such certainty and such confidence about what the climate is going to do is, well, I suppose I could be kind and say, it's annoying to me.

O'BRIEN: But you just got through saying that carbon dioxide levels are up, temperatures are going up. There is a certain degree of certainty that goes along with that, right?

CHRISTY: Well, the carbon dioxide is going up. And remember that carbon dioxide is plant food in the fundamental sense. All of life depends on the fact carbon dioxide is in the atmosphere. So we're fortunate it's not a toxic gas. But, on the other hand, what is the climate doing? And when we build, and I'm one of the few people in the world that actually builds these climate data sets, we don't see the catastrophic changes that are being promoted all over the place. For example, I suppose CNN did not announce two weeks ago when the Antarctic sea ice extent reached its all-time maximum, even though, in the Arctic in the North Pole, it reached its all-time minimum.

O'BRIEN: Let's talk about the critics in general. Many of the critics we hear from have links to the fossil fuel industry. A lot of their funding comes from the coal and oil industries. How about you?

CHRISTY: All of my funding is federal and state grants. And I apply for them and write my papers, which are peer-reviewed. So I have disengaged and never was really involved in any of that.

O'BRIEN: Does it make you angry that Al Gore got the Peace Prize?

CHRISTY: No, I think it's just a commentary on a prize that is a political prize. I think it was clearly designed to influence American elections and so on. But, in a sense, you can't begrudge someone who has become a star. I mean, he has really attracted the media attention and so on. So that's just what happens in the world of politics.

O'BRIEN: So you say this is a political award then?

CHRISTY: Well, as I said at the very beginning, I don't see any accomplishment here. I don't see CO2 going down because of the campaign, the crusade that he's on. And I only see it going up, because, and I come back to this, energy is absolutely vital for human society, and its use will increase. There's a tremendous amount of pent-up energy demand, especially in the Third World right now. So we shall see it rise.

O'BRIEN: But some would say it's time to look at alternatives that don't put that CO2 into the atmosphere.

CHRISTY: Well, I've done the work on that, and the only alternative that can make a tiny dent in the rate of temperature increase, if it is increasing at a high rate, is nuclear power. So if you built 1,000 nuclear power plants right now, you would be able to affect the global temperature by, listen to this, one-hundredth of a degree per decade. I don't know if that's the price we want to pay, but nuclear power, in democratically accountable countries, is fairly safe and useful that way.

O'BRIEN: John Christy, thank you for your time.