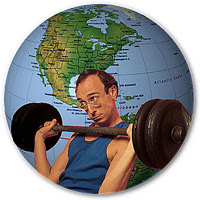 I don't put all that much original content on this blog, because others often express my thoughts better than I can, myself. Here's a good example from a book critical of American evangelicalism. I haven't read the book, and I don't know what "solutions" the author (Dick Staub) offers, but his diagnosis in this excerpt is pretty good, don't you think?

You can read a longer excerpt here.

The sobering contrast between historic Christianity and Christianity-Lite is illustrated by my recent experience in China. There, I heard the testimony of an underground church leader who had spent eighteen grueling years in prison, where he was beaten, chained, and subjected to physical torture and psychological torment, all because of his profession of faith in Jesus Christ. His captors lied to him, fabricated stories about infidelity on the part of his wife and a suicide attempt on the part of his son, offering to release him if he would just denounce Jesus Christ as Lord. He showed us the purple grooves in his wrist where the chains had penetrated his rotting, infected flesh, rubbing it down to the bones.

He wept as he told us of how close he had come to denying his faith so that he could avoid the escalating torture and be reunited with his family. Yet he resisted betraying his faith by concentrating on the example of Jesus, who, as the Apostle Paul said, "emptied himself, took upon himself the form of a servant and made himself obedient even to his own death" (Philippians 2:7-8). Though severely tempted, the Chinese Christian could not turn his back on Jesus, who had suffered so much for him. In China, the house church movement has grown, despite persecution, because of the deep faith of Christians like this man, who view their suffering for their faith as normative, not heroic.

The day I returned to the United States, I found at the top of my stack of mail a postcard from a new seeker-sensitive church. It pictured a convict in black and white striped prison garb, a ball and chain attached to his ankle. I flipped the card over to read the message on the back: "Does going to church feel like going to prison? Not anymore!" The card went on to offer the seeker comfortable, stadium-style seating at a local cineplex, complete with popcorn, face painting and other fun and games for the kids, and, best of all, no preaching—just multimedia presentations and an inspirational talk designed to lead to greater success in life!

Is the gospel offered by this seeker-sensitive church the same as the gospel preached in China but adapted to our very different cultural milieu, or is this a completely different gospel? Is this simply a strategic accommodation that will produce a vibrant local church with the same kind of spiritual depth and maturity that I witnessed among Christians in China? The answer seems obvious. Christians are called to be light of the world, not the lite of the world.

What kind of culture is today's popularized Christianity producing? Again, the answer seems obvious. Instead of creating a robust, authentic culture, Christianity-Lite simply imitates the broader popular culture's aesthetic in form and content. A friend of mine who was departing the pastorate after twenty years told me, "I embrace evangelical doctrine; I just can't stomach its culture." My friend Ralph Mattson once put it this way to me: "If Christians were going to create a subculture, why did they have to create one that is so boring, imitative, and uninspiring?"

Vibrant faith involves understanding Scripture, employing reason, benefiting from the lessons of tradition, and engaging in a profound personal experience of God. From this kind of spiritual intensity flows cultural transformation. I once heard a seminary professor summarize historian T. R. Glover's explanation about the influence of early Christians on culture this way: the early Christians out-thought, outlived, and out-died their pagan counterparts. This certainly cannot be said of pop Christians.

Within evangelicalism, many thoughtful people are troubled about the price we have paid for our "success." Some believe that in our quest for numeric growth, we have grown big but are shallow, producing an American Christianity three thousand miles wide but two inches deep. Others observe that our apparent success has been accomplished by conforming to American culture rather than transforming it, pointing out, as Alan Wolfe observed, that instead of theological, it is therapeutic; instead of intellectual, it is emotional and revivalist; instead of emphasizing a serving community, it is consumeristic and individualistic; instead of producing spiritual growth and depth, it is satisfied with entrepreneurialism and numeric growth. Instead of being a moral and spiritual beacon, evangelicalism is viewed as an important political and economic niche.

Dallas Willard reminds us of something anyone who reads the New Testament knows, Jesus never called anyone to be a Christian; he only called people to be disciples, individuals who would learn from him and obey all that he commanded. In place of Jesus' call to self-denial and promise of persecution and sacrifice, today's consumer-oriented, commoditized Christianity offers heaven in the future and fulfillment of the American dream now.