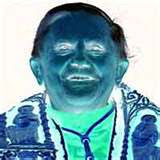 The May 21 issue of Newsweek has an article (review?) pertaining to the Pope's new book, Jesus of Nazareth. It's pretty disgusting - the review, that is, not the book. It reads more like a piece of advocacy than as anything designed to inform. And, of course, it calls into question every aspect of orthodox Christian belief it possibly can.

I don't subscribe to Newsweek, but I do subscribe to U.S. News & World Report. Since they have a reputation for being more conservative than Time or Newsweek, you might think they'd be more sympathetic to those who hold to orthodox beliefs. But no. Their religion articles are so bad I read through them as quickly as I can - hoping, as when visiting an outhouse, to get in and out before the stench becomes overwhelming.
OK, I overstated that. But I do like the word picture.
In any case, the moral of the story is this: Do not expect to learn anything about religion when reading an American newsmagazine. Do expect the magazines to turn over every rock to find some crackpot who can deny any Christian belief mentioned in the article, and expect that person's position to be presented as respectable, even if he's the only person who holds to it.
GetReligion.org has a worthy diatribe against Newsweek's "review." Please read it; it'll give you a better understanding of what I'm ranting about, with several specific examples.
.
(You can read Newsweek's full book review/article here. And you can read an excerpt from the Pope's book here. That Pope guy has some good thoughts. Maybe we should invite him to preach at my church, some time.)
.
And lest you think this post is a "minority report," here's a first person account (found here) from a professor at Notre Dame who was contacted for the Newsweek article. Very enlightening . . .

Readers may be interested in this bit of background to the risible article by Ms Miller. The person who is acknowledged as helping with the article called me a few weeks before this article appeared doing “research.” She wanted the names of famous books on Jesus and a description of their contents beginning with Reimarus. When I told her gently that the history of the “higher” criticism was a tad complicated she soldiered on asking about Schweitzer (the only name she seems to know) and then, jumping ahead nearly a century, something about the Jesus Seminar. When I told her about some sources she might consult she said that she was on “deadline.” Not to put too fine a point on it: she did not have a clue. Lesson to be learned: read these articles in the popular press with a shovel full of salt. As for the Miller piece itself: patronizing and snarky about sums it up. Oh, how I miss the days when Ken Woodward (Notre Dame - Class of 57) wrote on religion.