News You May Have Missed: 737 Lands on Mumbai Sidewalk 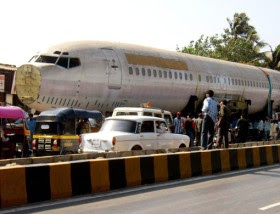 An earlier blog referenced the precarious commute to work in Mumbai, India. Now, it appears that even airplanes get stuck in Mumbai's famed traffic. Read this linked article for details.

My favorite part of the article is where it says, "No one is clear about its owner, its destination and the reason why it is parked there but the young ones are having a field day. Not only them, but some homeless men even found the cargo hold of the plane good enough to be used as a makeshift kitchen. And some even strung a clothesline where the plane's wings once were."

Walt Disney may think it's a small world, after all, but some parts of it are clearly very, very different.

(The BBC's version of the story is here. It's best if you read the quotes with your "Indian accent.")
Posted by Arnold at 09:57