News You May Have Missed: Murder Rate Hits 90% in U.S. 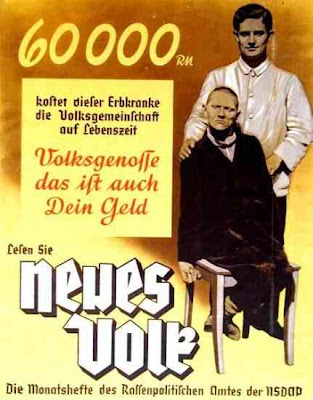 I've been reading lately about abortion practices in India and China, where it's a well-known practice to abort baby girls (er, female fetuses), because parents are constrained by law or economics to have only one child, and boys are more valuable to the family. Girls are merely money pits. This practice is technically illegal, but it happens, it's no big secret, sonogram manufacturers knowingly provide the equipment for it, and nobody ever seems to be prosecuted for it.

India and China didn't invent eugenic abortion, however. The Nazis didn't either, but during their Reich it was public policy, not something done in secret, to eliminate imbeciles and cripples. The picture you see here, which I found on Wikipedia, is from that time period. It promotes a forced euthanasia program; clearly, the regime would have supported eugenic abortion, as well. Translated, the poster says, "This person suffering from hereditary defects costs the community 60,000 Reichsmark during his lifetime. Fellow Germans, that is your money, too." Why waste money on worthless persons? Eliminate them for the benefit of all.
Peter Singer at Princeton is (in)famous for advocating something similar, but I've always considered him to be a fringe idiot, not someone in the vanguard of public thought.
Maybe I was wrong.
In today's NY Times on-line, I read the following:

Sarah Itoh, a self-described “almost-eleven-and-a-half,” betrayed no trace of nervousness as she told a roomful of genetic counselors and obstetricians about herself one recent afternoon.

She likes to read, she said. Math used to be hard, but it is getting easier. She plays clarinet in her school band. She is a junior girl scout and an aunt, and she likes to organize, so her room is very clean. Last year, she won three medals in the Special Olympics.

I am so lucky I get to do so many things,” she concluded. “I just want you to know, even though I have Down syndrome, it is O.K.”

Sarah’s appearance at Henry Ford Hospital here is part of an unusual campaign being undertaken by parents of children with Down syndrome who worry about their future in the face of broader prenatal testing that could sharply reduce the number of those born with the genetic condition.

Until this year, only pregnant women 35 and older were routinely tested to see if their fetuses had the extra chromosome that causes Down syndrome. As a result many couples were given the diagnosis only at birth. But under a new recommendation from the American College of Obstetricians and Gynecologists, doctors have begun to offer a new, safer screening procedure to all pregnant women, regardless of age.

About 90 percent of pregnant women who are given a Down syndrome diagnosis have chosen to have an abortion.

Would you have guessed 90%? I'm flabbergasted. . . Particularly because this statistic comes from the NY Times, which is not exactly known for its pro-life advocacy. Elsewhere in the article we read such tidbits as:

Genetic counselors, who often give test results to prospective parents, say they need to respect patients who may have already made up their minds to terminate their pregnancy. Suggesting that they read a flyer or spend a day with a family [to learn what Down syndrome children are really like], they say, can unnecessarily complicate what is for many a painful and time-pressured decision.

So once again, the value of a human life comes down to the degree upon which it impinges on my own. We wouldn't want to "complicate" a "time-pressured" decision, would we? Somebody might have to miss a concert or a party or a business trip if forced to read a flyer or learn something more about the life they're considering terminating. How intrusive.
.
I don't have kids and probably never will. But you don't have to have kids to know that something about killing people to improve the gene pool and personal convenience is very, very wrong.
.
I encourage you to read the entire NY Times article (you can register for free). There's actually a positive spin to what's happening, in the form of parents with Down Syndrome kids getting the word out that these are human beings worthy of love. I'm just sorry it's come to this.
Posted by Arnold at 09:39