Apropos our discussion of marriage, here a story of an evangelical marriage that is lasting, and even doing pretty well, albeit with a twist . . . 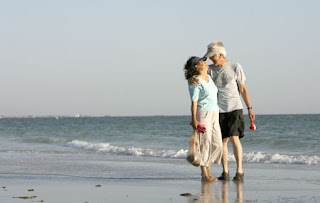 What happens when the leader of an anti-Mormon ministry is married to a Mormon? Not what you'd probably think.

Read the article from the St Petersburg (FL) Times here. It's too long to paste in this entry, but it's worth the read.

Although I'd strongly discourage a follower of Christ from marrying someone who isn't (and that's what I believe the Bible teaches, as well), it appears that this was a case of two nonbelievers marrying, then one of them later coming to faith in Christ. The article doesn't state that explicitly, but that's the way it looks to me. In which case, this article portrays a "mixed" marriage that's actually pretty attractive. Check out the husband's comment about what he considers his role in the marriage to be. No wonder they get along.
.
(You might also want to check out the husband's web site: WhatMormonsDontTell.com . You can learn some good things about Mormon beliefs there.)
.
(And the lyrics in the title come from George and Ira Gershwin's song here. If you haven't heard the version recorded by Ella and Louis, your life isn't complete: Disc 2, Track 5.)
Posted by Arnold at 20:20