Visit a Christian Brothel Near You...Or Start Your Own 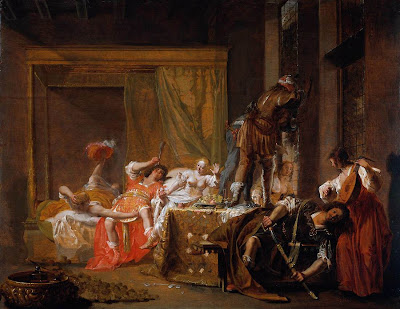 Earlier this week, I mentioned my discovery of blogger Nate Claiborne. In today's entry, he paints a vivid picture of Christian idolatry. Here are some excerpts:

When one realizes that Bible starts and ends with a marriage, the pieces may seem to fit together a bit smoother. Enclosed within the humble beginnings of human marriage was the divine mystery of ultimate marriage.... If our marriages between men and women are to reflect the marriage of the people of God to Christ, then defiling that relationship with Christ is analogous to defiling the human relationship with one’s spouse.

This is why God presses the Gospel on the whole of our lives, this is why not paying close attention to our devotion to God is like adultery. To see this maybe more clearly, let’s use an example.

I am getting married tomorrow…to my lovely fiance Alexandra Kaufman. We are entering into a covenant before God to pledge ourselves only to one another, until death do us part. Considering that we are both virgins, the honeymoon will be quite the intoxicating, blissful experience as well. But suppose sometime around the first of the year something changes.

Alexandra initially only came to me for sexual fulfillment, but somewhere along the line her heart starts to wander a bit. It’s not as noticeable at first, we continue on as usual. But then after a while, she starts bringing home other guys to sleep with. This goes on briefly before I casually remind her that she is supposed to come to me for that kind of fulfillment. With that in mind, she apologizes and then does just that.

But by doing that, all she changes is that now she expects me to find the other guys for her. She comes to me for fulfillment, but she wants me to give her all manner of other men to satisfy her rather than myself. She could have the only type of fulfillment she was meant to have if she would only just ask for it, but she continues sowing her wild oats even within our own bedroom. I don’t particularly seem to mind though, because she is at least nice about it and she makes sure to not interfere with my sleeping habits. We both continue on in this sort of affair, because after all, it’s only marriage, right?

I would be worried if anybody reading this was not appalled at the possibility of my marriage…turning into something like this.

However, we often don’t seem too appalled when our relationship with Christ, which is pictured as a marriage turns into something like this.

We start out fully devoted, only to slowly turn our affections to things of this world. Maybe later we get gently rebuked and come to our senses, but instead of giving up our idols, we merely start coming to Christ to get them. What is worse still is that we fully expect God to respond in the above manner and not particularly mind if we are out busy working the streets, spreading our legs for whoever passes by, so long as we come on Sundays and renew our vows.

How would Alexandra feel if I went to the strip clubs 6 days a week and rounded out the night by picking up a prostitute, so long as I came to her at least once a week for a passionate reconnection?

How should God respond when we do the same thing?

In Christianity in America, this is the course of the mainstream. One glance at some of the largest churches in America reveals that they are run more like brothels. People come and are encouraged in their adultery by appealing to the idolatry of health, wealth and happiness as what God intends to give to us rather than promoting the orthodox idea that it is Himself that is to be most treasured by us.

If you'd like to read his entire entry, it's here.