"Better Deaths Than Any I've Ever Seen" 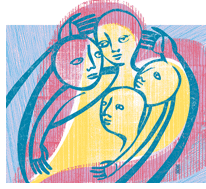 There are only a couple things I pray regarding the end of my life. One of them is that I will die well. By that, I mean that if I have any advance warning of my impending earthly demise, I desire to die in faith, confidence, trust, and peace, not "like the rest of men, who have no hope" (1 Thess. 4.13). I want to honor God not just in how I live my life, but also in how I "live" my death.
If it's a protracted death, Iwould love for it to be something like what's described in today's New York Times. The story profiles nuns at a convent and the provisions they've made for each other to die among friends, with dignity, in an environment of hope. Here are some excerpts:

July 9, 2009
Months to Live
Sisters Face Death With Dignity and Reverence
By JANE GROSS
PITTSFORD, N.Y. —
…
A convent is a world apart, unduplicable. But the Sisters of St. Joseph, a congregation in this Rochester suburb, animate many factors that studies say contribute to successful aging and a gentle death — none of which require this special setting. These include a large social network, intellectual stimulation, continued engagement in life and spiritual beliefs, as well as health care guided by the less-is-more principles of palliative and hospice care — trends that are moving from the fringes to the mainstream.

For the elderly and infirm Roman Catholic sisters here, all of this takes place in a Mother House designed like a secular retirement community for a congregation that is literally dying off, like so many religious orders. On average, one sister dies each month, right here, not in the hospital, because few choose aggressive medical intervention at the end of life, although they are welcome to it if they want.

“We approach our living and our dying in the same way, with discernment,” said Sister Mary Lou Mitchell, the congregation president. “Maybe this is one of the messages we can send to society, by modeling it.”

Primary care for most of the ailing sisters is provided by Dr. Robert C. McCann, a geriatrician at the University of Rochester, who says that through a combination of philosophy and happenstance, “they have better deaths than any I’ve ever seen.”
…
“It is much easier to guide people to better choices here than in a hospital,” he said, “and you don’t get a lot of pushback when you suggest that more treatment is not better treatment.”
…
Few sisters opt for major surgery, high-tech diagnostic tests or life-sustaining machinery. And nobody can remember the last time anyone died in a hospital, which was one of the goals in selling the old Mother House, with its tumbledown infirmary…and using the money to finance a new facility appropriate for end-of-life care.

“There is a time to die and a way to do that with reverence,” said Sister Mary Lou, 56, a former nurse. “Hospitals should not be meccas for dying. Dying belongs at home, in the community. We built this place with that in mind.”

….Here, everyone mixes. Of the 150 residents, nearly half live in the west wing, designated for independent living….Forty sisters live in assisted-living studios, and another 40 in the nursing home and Alzheimer’s unit, all in the east wing, with the chapel, dining rooms and library at the central intersection. Closed-circuit television allows those confined to their rooms to watch daily religious services.
….
Dr. McCann said that the sisters’ religious faith insulated them from existential suffering — the “Why me?” refrain commonly heard among those without a belief in an afterlife. Absent that anxiety and fear, Dr. McCann said, there is less pain, less depression, and thus the sisters require only one-third the amount of narcotics he uses to manage end-of-life symptoms among hospitalized patients.

On recent rounds, Dr. McCann saw …Sister Jamesine Riley, 75, once the president of the congregation, who barely survived a car accident that left her with a brain injury, dozens of broken bones and pneumonia. “You’re not giving up, are you?” Dr. McCann asked her. “No, I’m discouraged, but I’m not giving up,” Sister Jamesine replied in a strong voice.
….
Some days, Dr. McCann said, he arrives with his “head spinning,” from hospitals and intensive-care units where death can be tortured, impersonal and wastefully expensive, only to find himself in a “different world where it’s really possible to focus on what’s important for people” and, he adds, “what’s exportable, what we can learn from an ideal environment like this.”
….
Barbara Cocilova, the nurse practitioner here, sees differences in the health of these sisters compared with elderly patients in other settings….Among those with Alzheimer’s, Ms. Cocilova said, diagnostic tests tend to produce better-than-expected results among those who are further along in the disease process, a possible result of mental stimulation.
….
Sister Bernadine Frieda, 91, spry and sharp, spends her days visiting the infirm with Sister Marie Kellner, 77, both of them onetime science teachers. Sister Marie, who left the classroom because of multiple sclerosis, reminds an astounded sister with Alzheimer’s that she was once a high school principal (“I was?!”) and sings “Peace Is Like a River” to the dying. “We don’t let anyone go alone on the last journey,” Sister Marie said.

Seven priests moved here in old age, paying their own way, as does Father Shannon, who presides over funerals that are more about the celebratory “alleluia” than the glum “De Profundis.”…He shares with them the security of knowing he will not die among strangers who have nothing in common but age and infirmity.

“This is what our culture, our society, is starved for, to be rich in relationships,” Sister Mary Lou said. “This is what everyone should have.”

I've often criticized the Times for cluelessness on religious matters. This article is a notable exeption. You can read the entire thing here.
And click here for a short audio slideshow about the sisters and their home. It's excellent.
.
(In case you're wondering, my health is fine, as far as I know. There are no veiled messages in this blog post!)
Posted by Arnold at 09:29