In Praise of Celibacy 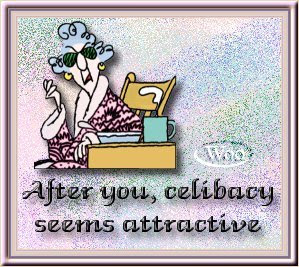 I'm still waiting for a preacher to read 1 Corinthians 7.32-35 at a wedding. As a lover of irony, I'll make sure it's read at my wedding...if God makes me get married some day. Don't hold your breath waiting for that.
I talk to a lot of people who somewhat recognize the value of celibacy (a.k.a. singleness), but very few seem to value it as a high calling. Jesus did, not only for Himself but also for His followers (Matthew 19.10-12), but somehow we zip right past those comments of His, putting them in the "Idealistic But Not Realistic" category of the things He said that we don't like.
.
Marriage obviously has its place, and it was God's idea. My intention is not to demean marriage, but to advocate that singleness should be seen as equivalent in value, not as Plan B or Second Best. Marriage and singleness are both Plan A...the only question is which Plan A God wants you to have.
.
The Christianity Today website just posted an interview with Christine Colon, who with Katie Fields cowrote a new book called Singled Out: Why Celibacy Must Be Reinvented in Today's Church. I just ordered the book and am looking forward to some good reading that will confirm my prejudices. My only regret, so far, is that Colon and Fields didn't draft a celibate/single male as an additional cowriter. That oversight probably dooms the book to be read almost exclusively by women. Nevertheless, here are a couple excerpts from the interview:

Celibacy can be a radical testimony to God's love and provision, because it reminds us that our ultimate fulfillment has to be union with God. That is equally true for married couples, but oftentimes marriage is seen as, once you have that partner you will be fulfilled. And that's a lie. With celibacy, you have to come to grips with that early on, to say, "My fulfillment lies in God, and there are always going to be these longings unfulfilled here on earth," but that's a good thing — if everything were fulfilled on earth, we wouldn't need God.

Marriage is the metaphor for God's exclusive love for his church, and it's a good and powerful metaphor. But singleness is also a metaphor of God's love — the aspect of God's love that extends to everyone. Oftentimes church communities become so ingrown and focused on, "Let's build up our families, let's build up our community." Wait a second, what are we here for? Singles don't have that exclusive relationship, so we need to build relationships out. And the church itself needs to as well.

We wanted to look at celibacy as a state in which we are content with where God has called us, and are also willing if God calls us to a different state. We're not eliminating the possibility of marriage, but we're not put on hold until marriage comes. It's not, "I vow to be celibate until I die." It is saying, "God has called me to this state; I am going to serve God right here. If he calls me to marriage, great. I will serve God there. If he doesn't call me to marriage, fine. I'm going to serve God as a single person." With celibacy, we're trying to draw from the past but not be wrapped up in, "You've made your vow, and you're done."

You can read the entire interview here, and CT's review of the book here.
Posted by Arnold at 11:44