A.N. Wilson - To and From Atheism 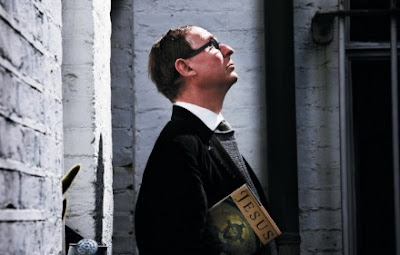 A.N. Wilson has had a career as an Oxford teacher, biographer, and much-awarded journalist. In Christian circles, he's perhaps best known for a widely reviled biography of C.S. Lewis.
At the time he wrote about Lewis, Wilson would have called himself an atheist. But over time, he's come back to theism and, apparently, Christ. Here are a few excerpts from a recent article he wrote; it's good enough, though, that you might want to read the whole thing here.

By nature a doubting Thomas, I should have distrusted the symptoms when I underwent a “conversion experience” 20 years ago. Something was happening which was out of character – the inner glow of complete certainty, the heady sense of being at one with the great tide of fellow non-believers. For my conversion experience was to atheism. There were several moments of epiphany, actually, but one of the most dramatic occurred in the pulpit of a church.

At St Mary-le-Bow in the City of London, there are two pulpits, and for some decades they have been used for lunchtime dialogues. I had just published a biography of C S Lewis, and the rector of St Mary-le-Bow, Victor Stock, asked me to participate in one such exchange of views.

I can remember almost yelling that reading C S Lewis’s Mere Christianity made me a non-believer – not just in Lewis’s version of Christianity, but in Christianity itself. On that occasion, I realised that after a lifetime of churchgoing, the whole house of cards had collapsed for me – the sense of God’s presence in life, and the notion that there was any kind of God, let alone a merciful God, in this brutal, nasty world. As for Jesus having been the founder of Christianity, this idea seemed perfectly preposterous....It was a nonsense, together with the idea of a personal God, or a loving God in a suffering universe. Nonsense, nonsense, nonsense.

It was such a relief to discard it all that, for months, I walked on air. At about this time, the Independent on Sunday sent me to interview Dr Billy Graham, who was conducting a mission in Syracuse, New York State, prior to making one of his journeys to England. The pattern of these meetings was always the same. The old matinee idol spoke. The gospel choir sang some suitably affecting ditty, and then the converted made their way down the aisles to commit themselves to the new faith. Part of the glow was, surely, the knowledge that they were now part of a great fellowship of believers.

As a hesitant, doubting, religious man I’d never known how they felt. But, as a born-again atheist, I now knew exactly what satisfactions were on offer. For the first time in my 38 years I was at one with my own generation. I had become like one of the Billy Grahamites, only in reverse. If I bumped into Richard Dawkins (an old colleague from Oxford days) or had dinner in Washington with Christopher Hitchens (as I did either on that trip to interview Billy Graham or another), I did not have to feel out on a limb. Hitchens was excited to greet a new convert to his non-creed and put me through a catechism before uncorking some stupendous claret. “So – absolutely no God?” “Nope,” I was able to say with Moonie-zeal. “No future life, nothing ‘out there’?” “No,” I obediently replied. At last! I could join in the creed shared by so many (most?) of my intelligent contemporaries in the western world – that men and women are purely material beings (whatever that is supposed to mean), that “this is all there is” (ditto), that God, Jesus and religion are a load of baloney: and worse than that, the cause of much (no, come on, let yourself go), most (why stint yourself – go for it, man), all the trouble in the world, from Jerusalem to Belfast, from Washington to Islamabad.

My doubting temperament, however, made me a very unconvincing atheist. And unconvinced. My hilarious Camden Town neighbour Colin Haycraft, the boss of Duckworth and husband of Alice Thomas Ellis, used to say, “I do wish Freddie [Ayer] wouldn’t go round calling himself an atheist. It implies he takes religion seriously.”
This creed that religion can be despatched in a few brisk arguments (outlined in David Hume’s masterly Dialogues Concerning Natural Religion) and then laughed off kept me going for some years. When I found myself wavering, I would return to Hume in order to pull myself together, rather as a Catholic having doubts might return to the shrine of a particular saint to sustain them while the springs of faith ran dry.

Attractive and amusing as David Hume was, did he confront the complexities of human existence as deeply as his contemporary Samuel Johnson, and did I really find him as interesting?

A materialist Darwinian was having dinner with me a few years ago and we laughingly alluded to how, as years go by, one forgets names. Eager, as committed Darwinians often are, to testify on any occasion, my friend asserted: “It is because when we were simply anthropoid apes, there was no need to distinguish between one another by giving names.”

This credal confession struck me as just as superstitious as believing in the historicity of Noah’s Ark. More so, really.

Do materialists really think that language just “evolved”, like finches’ beaks, or have they simply never thought about the matter rationally? Where’s the evidence? How could it come about that human beings all agreed that particular grunts carried particular connotations? How could it have come about that groups of anthropoid apes developed the amazing morphological complexity of a single sentence, let alone the whole grammatical mystery which has engaged Chomsky and others in our lifetime and linguists for time out of mind? No, the existence of language is one of the many phenomena – of which love and music are the two strongest – which suggest that human beings are very much more than collections of meat. They convince me that we are spiritual beings, and that the religion of the incarnation, asserting that God made humanity in His image, and continually restores humanity in His image, is simply true. As a working blueprint for life, as a template against which to measure experience, it fits.

When I think about atheist friends, including my father, they seem to me like people who have no ear for music, or who have never been in love.

I haven’t mentioned morality, but one thing that finally put the tin hat on any aspirations to be an unbeliever was writing a book about the Wagner family and Nazi Germany, and realising how utterly incoherent were Hitler’s neo-Darwinian ravings, and how potent was the opposition, much of it from Christians; paid for, not with clear intellectual victory, but in blood. Read Pastor Bonhoeffer’s book Ethics, and ask yourself what sort of mad world is created by those who think that ethics are a purely human construct. Think of Bonhoeffer’s serenity before he was hanged, even though he was in love and had everything to look forward to.

My departure from the Faith was like a conversion on the road to Damascus. My return was slow, hesitant, doubting. So it will always be; but I know I shall never make the same mistake again. Gilbert Ryle, with donnish absurdity, called God “a category mistake”. Yet the real category mistake made by atheists is not about God, but about human beings. Turn to the Table Talk of Samuel Taylor Coleridge – “Read the first chapter of Genesis without prejudice and you will be convinced at once . . . ‘The Lord God formed man of the dust of the ground, and breathed into his nostrils the breath of life’.” And then Coleridge adds: “‘And man became a living soul.’ Materialism will never explain those last words.

Excerpted from NewStatesman.com
Posted by Arnold at 07:36