What Could Make Me Ashamed To Be An American? 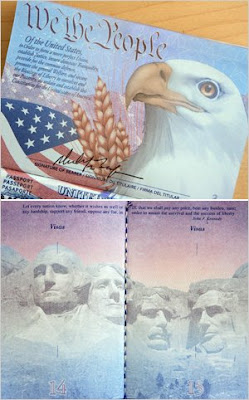 My old passport was nearing its expiration date, so I sent off for a new one. Mindful of last year's processing bottlenecks, I paid the extra $60 for expedited handling. And that's what I got; the new passport arrived exactly 1 week after I sent in the paperwork.

What I actually received is a nightmare. Have you seen the design of the new passports? I'll be embarrassed to flash that thing on any foreign border. It used to be that passport pages were demure backgrounds for the visas and stamps you'd get while travelling. Now, the passport has been turned into a gaudy picturebook, complete with quotations from historical Americans, the national anthem, and the constitution. How those poor border guards are supposed to find a place to put their stamps, or how anyone is supposed to be able to read them against the dark, intense background colors, is beyond me.

Reportedly, the design was approved by Secretary of State Colin Powell. All I can think is that he signed off on this travesty only after he had already decided to resign. It must have been his way of getting even with the administration that he felt had mistreated him.

Apparently, I'm not the first to have this low opinion of the new design. It's been called "the ugly khaki shorts of passports," "like being given a coloring book that your brother already colored in," and "a tangled mess," Here are a few other choice quotes:


Where did the designer go after this project? Apparently, he moved on to the Acura TL redesign.