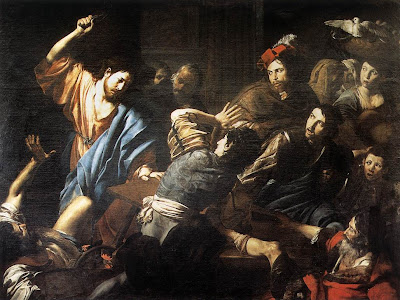 In Luke 9.51-56, James and John ask whether they should call down fire from heaven to destroy a Samaritan village that rejected Jesus. Jesus rebuked them for the suggestion. A.B. Bruce has this to say about that:

Jesus too, all gentle as He was, had His thunderbolts; but He reserved them for other objects than poor, benighted, prejudiced Samaritans. His zeal was directed against great sins, and powerful, privileged, presumptuous sinners; not against little sins, or poor, obscure, vulgar sinners. He burst into indignation at the sight of His Father's house turned into a den of thieves by those who ought to have known, and did know better; He only felt compassion for those who, like the woman by the well, knew not what they worshipped, and groped after God in semi-heathen darkness. His spirit was kindled within Him at the spectacle of ostentatious orthodoxy and piety allied to the grossest worldliness; He did not, like the Pharisee, blaze up in sanctimonious wrath against irreligious publicans, who might do no worship at all, or who, like the heretical Samaritans, did not worship in the right place. Would that zeal like that of Jesus, aiming its bolts at the proud oak and sparing the humble shrub, were more common! But such zeal is dangerous, and therefore it will always be rare.

James and John...thought themselves actuated by zeal for the glory of their Lord, and so they were in part. But the flame of their zeal was not pure: it was mixed up with the bitter smoke of carnal passions, anger, pride, self-will. Then, again, their spirit was not such as became the apostles of the gospel, the heralds of a new era of grace. They were chosen to preach a message of mercy to every creature, even to the chief of sinners; to tell of a love that suffered not itself to be overcome of evil, but sought to overcome evil with good; to found a kingdom composed of citizens from every nation, wherein should be neither Jew nor Samaritan, but Christ all and in all. What a work to be achieved by men filled with the fire-breathing spirit of the "sons of thunder"! Obviously a great change must be wrought within them to fit them for the high vocation wherewith they have been called. Yet again, the spirit of James and John was, of course, not that of their Master. He "came not to destroy men's lives, but to save them."

Painting: Valentin de Boulogne, "Christ Driving the Money Changers out of the Temple," c. 1618
.
Posted by Arnold at 10:32