No Calvinists in the Presidential Race

It's become common in my Presbyterian circles to point out that we all have "gods" and "idols" in our lives, things we think we need in order to be happy and fulfilled. Usually, however, they are less literal than what our presidential aspirants are carrying in their pockets. Time Magazine tells us that Senator Obama, for example - a professed Christian - carries "a bracelet belonging to a soldier deployed in Iraq, a gambler’s lucky chit, a tiny monkey god and a tiny Madonna and child." Does that make Obama a Hindu-Catholic-Pagan Christian, or just a confused man? 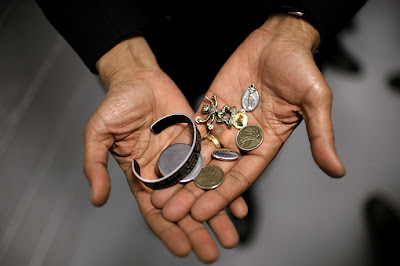 McCain and Clinton have their lucky charms, as well, though apparently not in the same quantity. See the Time web page for more details.

At this point, I'd really like to throw some stones, especially at Obama, who's shown on several occasions now that his claim of allegiance to Christ doesn't include much in the way of spiritual discernment or an understanding of the Scriptures. But I've got my own idols, too, just better hidden than his.

Nevertheless, I really don't believe there's such a thing as "luck" in life. Events may appear random, of course, and they may fail to meet our expectations or hopes, but they can never be divorced from the One who runs the universe.

No one from the east or the west
or from the desert can exalt a man.
But it is God who judges:
He brings one down, he exalts another.
- Psalm 75.6,7
Posted by Arnold at 08:58