Why Bach is a Genius 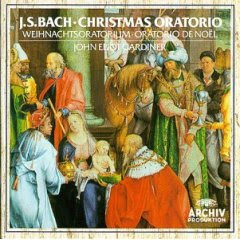 If you've read my 6 previous posts about Bach, you know that he's the greatest composer who ever lived. As I listen through my 155-CD set of his complete works, I'm repeatedly impressed and often amazed at his skill. I'm only about two-thirds of the way through the set, and even hearing something once (or multiple times) hardly means that I understand all the mastery that went into a piece.
Which leads to last night, and the Bach concert I was able to attend in Portland. The Bach Cantata Choir, a local group of mostly amateurs, presented Parts 4-6 of the Christmas Oratorio, and a few excerpts from Parts 1 and 2. There were 200-300 people in the audience . . . not bad at $20 a pop. We got our money's worth.
Bach wrote these 6 cantatas for the Advent and Christmas seasons. Each one lasts 20-30 minutes, covers part of the Christmas story, and includes a mix of solos, duets, trios, quartets, and choruses/chorales. It's all in German, of course, but the program we were given provided both the German text and an English translation.
OK, that's enough background. Now, why is Bach a genius? It was most clearly demonstrated at the very end, the final chorus of Part 6. The orchestral part is festive, joyous, celebratory. The text rejoices at the coming of Jesus and remarks on how He has pulverized death, devil, sin, and hell and brought man to the side of God. Delightful, but what makes it genius? The tune the choir is singing is "O Haupt voll Blut und Wunden," which we know as "O Sacred Head Now Wounded," a hymn that we sing around Good Friday. It talks about our sin and Jesus' suffering in our place (for example, "Mine, mine was the transgression, but thine the deadly pain").
So here is Bach, writing some of the most joyful orchestral music you can imagine, using a text of rejoicing, and yet introducing a tune that foreshadows the death of Christ. It is as if to say, "Yes, we're happy now because our Saviour is born, but don't forget that this baby is born to die . . . and don't forget that you're the one who will murder Him." That is genius.
You can hear a brief excerpt by going to this link, then clicking on Disc 2, Track 29.
So Merry Christmas. As we remember the birth of our Lord and Savior, may we also remember why this little baby took on human flesh . . . and how this innocent child, later to be an innocent man, will meet His death.