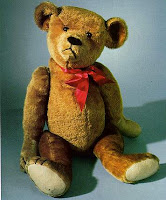 Event #1:
School teacher in Sudan lets class name teddy bear mascot. Class chooses "Mohammed" (which is also the name of one of the students). Teacher is arrested, then convicted of insulting religion - that religion would be Islam, of course - and protesters outside her jail call for her execution.
Event #2:
Sean Taylor, safety for the Washington Redskins, is killed in a burglary. His father makes the following comments in this excerpt from a Miami Herald article: ``Whatever took place between He and God at the time, He [God] had it all in control. I'm at peace with God, and God, he makes no mistakes.'' He said he was not angry at the person who killed his son. ``You know who you are if you did it, turn yourself in. Vengeance is not mine, it's God's. He holds that in his hands.''
Question:
Which religion has a God big enough to defend Himself?
Observation:
Pope Benedict XVI was on target when he said a year ago that the problem with Islam is that it's not a faith that you can reason with.
.
And by the way, you really ought to read that address Benedict gave in Regensburg - the speech that led to Muslims rioting in the streets because they thought the Pope was unjustly accusing them of being violent people. It's a perceptive discussion of the relationship between faith and reason and helps to answer Tertullian's question, "What has Athens to do with Jerusalem?"
Posted by Arnold at 10:55