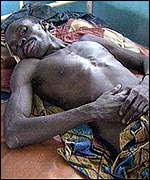 Friends of a friend (of a friend?) are missionary doctors in Uganda. You may have heard of the latest Ebola outbreak there. The doctors, a husband and wife team, are in the midst of it, and their blog certainly transcends the usual daily blog fare. It reads like a movie script, except it's true and it's happening now.
.
Here's an excerpt from a couple days ago, and you can read all their entries here. (By the way, MSF stands for Medecins sans Frontieres, which we know as Doctors Without Borders; WHO is the UN's World Health Organization; and CDC is the Centers for Disease Control and Prevention, based in Atlanta.)
.

The official case count has gone up from 51 to 79 since the initial numbers were released four days ago. We now have 21 admitted in Bundibugyo (up from 16 yesterday) while only one more patient came to Kikyo (10 total). Dr. Sessanga continues to struggle on with his case; Dr. Jonah needed IV fluids today but was reported to be stable. It was another dawn to post-dusk day for Scott, which included two three-hour-long meetings as well as final assembly and initial use of a brand new lawnmower we just imported in the nick of time to keep the airstrip open for the sudden increase in flights. Three MSF personnel hitched a ride in on the plane that took our team out; more CDC and WHO folks are expected on Wednesday, so keeping the airstrip open is an important part of the logistics of this operation.

Pray for Scott to have wisdom to know his role, to respond with leadership and compassion and wisdom and courage. We are used to being a bit more on the sidelines politically, focusing on patient care. This crisis throws him into the middle of everything, and the lines of authority are not always clear. Added to that is the fact that this is a new strain, so if one person makes a statement about transmission and another challenges it, we really can’t be sure who is right, because this epidemic may not progress in the same way that others have done.

The MSF team is impressive and fascinating, they are tracking numbers and plotting maps and have already concluded from interviews that besides patient care in the hospital, the greatest risk factor is the handling of dead bodies at burial.

We do sense the incredible outpouring of concern and prayer from our friends. It is a bit edgy to go hour to hour with the background thought of . . .do I feel a twinge of nausea, could that be a fever coming on . . . But mostly we remain confident that our measures to protect ourselves even before we knew the gravity of the situation were adequate. The kids made it to Kampala safe and sound, and compared to the agony of deciding to send them away, the reality of missing them is not nearly as painful. Scott was remembering the days of war, when the team dwindled down to two or three adults only, it feels like that again now, with all the separation and uncertainty.

You can find the doctors' blog at www.paradoxuganda.blogspot.com.
Posted by Arnold at 09:37