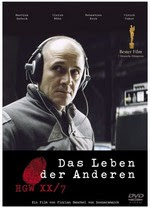 From 1979-1982, in the years between college and graduate school, I worked in Eastern Europe. This was back in the day when these countries were Communist and when America's biggest adversary was the Soviet Union and the countries under its domination. Although I was in almost all of the Soviet Bloc countries, my focus was on East Germany and Poland. So I spent a lot of time in East Germany, which the Germans called the DDR (Deutsche Demokratische Republik) and the English speakers called the GDR (German Democratic Republic). It was another world. Except for maybe North Korea and a couple of the "-stan" countries in Central Asia, there's nothing like it today.
With the possible exception of the Soviets' KGB, and most likely not even excepting them, the DDR operated the most effective secret police system in the world. It was called the Ministerium fuer Staatssicherheit, but everyone referred to it as Stasi. In this country of 16 million, there were 91,000 Stasi employees and 300,000 informers. That works out to 1 out of every 41 citizens. To give you a sense of what that means, that ratio would yield 100,000 people in Atlanta who were spying on you, or 100 people in my church of 4,000, or 4 people in my Sunday School class of 150. And yes, there were informers in churches, including pastors and bishops in the main church denomination (the Lutherans).
.
When "The Wall" fell in 1989, the Stasi shredded documents as quickly as they could. Before they were stopped, they had accumulated 16,000 bags of confetti. The German government is now reassembling those shreddings. Of what didn't get shredded, there are 138 km (81 miles) of documents in the archives; add in microfilm and the like and the grand total is 172 km (107 miles). That is not a typo. That means, roughly, that everyone in the country had a file that was, on average, half an inch thick. Nearly 100 pages. Of course, some files were much thicker than that. I wonder how thick mine is.
This year's Academy Award winner for best foreign language film is The Lives of Others (or, in German, Das Leben des Anderen). It's the story of a Stasi officer and the artists' community he spies on. If you liked Helen Mirren's acting in The Queen, you'll like Ulrich Muehe's acting in this film. It's a study of a person, how he starts committed to and believing one thing, and how he has to grapple with those beliefs. This actor communicates more with his face than most can manage with a torrent of words. The rest of the cast is almost equally good. But beyond the acting, the film is fascinating for how it captures the mood of the DDR and the methods of the Stasi during this time (1984, 2 years after I left and 5 years before The Wall fell). Some of it was even filmed in the old Stasi headquarters, which I visited a few years ago.
If you like quality films that allow you to think and keep you intrigued, see this film. Yes, it's in German with subtitles, but don't let that stop you. Trust me, it's fine, and after the first 5 or 10 minutes, you'll forget you're reading. The Lives of Others is showing in 2 theatres in Atlanta. How easy it'll be to find in your own city, I don't know, though the theatre was surprisingly full when I saw the movie on a Saturday afternoon. If the theatre doesn't work for you, there's always the DVD, which I'm guessing will be out soon. A word of advice, though: try not to learn too much about the plot details before you go; you'll enjoy the little surprises more that way.
See this film. Marvel at the acting. Hang with the story. And thank God we don't live in a society like that.
Posted by Arnold at 11:14