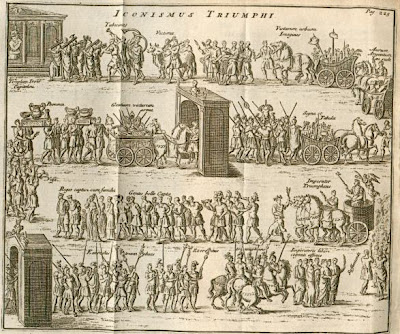 Tomorrow we will inaugurate a new president, and the inauguration will be followed by a parade. You may never have thought about this, but there are several parades in the Bible. For now, let's just look at one:

"But thanks be to God, who always leads us in triumphal procession in Christ and through us spreads everywhere the fragrance of the knowledge of him" (2 Cor. 2.14).

For years, I've read the verse and heard perhaps the occasional sermon touching on it. But where does this term "triumphal procession" come from, and what does it really mean?
A while back, I read a novel by Robert Harris entitled Imperium. It takes place in the time of Cicero, Pompey, and Julius Caesar, roughly 50 years before the birth of Christ. From Wikipedia, I learned that a Triumph was "a civil ceremony and religious rite of ancient Rome, held to publicly honour the military commander of a notably successful foreign war or campaign and to display the glories of Roman victory....The [parade] route would be lined with cheering crowds who would shower the triumphator with flowers."
Here's a passage from Imperium about Pompey's triumphal return to Rome. It's a bit lengthy, but read it with an eye toward Christ's triumphal procession that Paul mentioned in 2 Corinthians. Where do we fit in this parade?

The twenty-ninth duly arrived, and what a day it was! Rome had not seen such a spectacle since the days of Sulla. As I waited by the Triumphal Gate it seemed that everyone had turned out to line the route. First to pass through the gate from the Field of Mars was the entire body of the Senate, including Cicero, walking on foot, led by the consuls and the other magistrates. Then the trumpeters, sounding the fanfares. Then the carriages and litters laden with the spoils of the Spanish war – gold and silver, coin and bullion, weapons, statues, pictures, vases, furniture, precious stones, and tapestries – and wooded models of the cities Pompey had conquered and sacked, and placards with their names, and the names of all the famous men he had killed in battle.

Then the massive, plodding white bulls, destined for sacrifice, with gilded horns hung with ribbons and floral garlands, driven by the slaughtering priests. Then trudging elephants – the heraldic symbol of the Metelli – and lumbering oxcarts bearing cages containing the wild beasts of the Spanish mountains, roaring and tearing at their bars in rage. Then the arms and insignia of the beaten rebels, and then the prisoners themselves, the defeated followers of Sertorius and Perperna, shuffling in chains. Then the crowns and tributes of the allies, borne by the ambassadors of a score of nations. Then the twelve lictors of the imperator, their rods and axes wreathed in laurel.

And now at last, to a tumult of applause from the vast crowd, the four white horses of the imperator’s chariot came trotting through the gate, and there was Pompey himself, in the barrel-shaped, gem-encrusted chariot of the triumphator. He wore a gold-embroidered robe with a flowered tunic. In his right hand he held a laurel bough and in his left a scepter. There was a wreath of Delphic laurel on his head, and his handsome face and muscled body had been painted with red lead, for on this day he truly was the embodiment of Jupiter. Standing beside him was his eight-year-old son, the golden-curled Gnaeus, and behind him a public slave to whisper in his ear that he was only human and all this would pass.

Behind the chariot, riding on a black warhorse, came old Metellus Pius, his leg tightly bandaged, evidence of a wound incurred in battle. Next to him was Scipio, his adopted son – a handsome young fellow of twenty-four: no wonder, I thought, that Lepida preferred him to Cato – and then the legionary commanders, including Aulus Gabinius, followed by all the knights and cavalry, armor glinting in the pale December sun. And finally the legions of Pompey’s infantry, in full marching order, thousands upon thousands of sunburnt veterans, the crash of their tramping boots seeming to shake the very earth, roaring at the top of their voices “Io Triumphe!” and changing hymns to the gods and singing filthy songs about their commander in chief, as they were traditionally permitted to do in this, the hour of his glory.

It took half the morning for them all to pass, the procession winding through the streets toward the Forum, where, according to tradition, as Pompey ascended the steps of the Capitol to sacrifice before the Temple of Jupiter, his most eminent prisoners were lowered into the depths of the Carcer and garroted – for what could be more fitting than that the day which ended the military authority of the conqueror should also end the lives of the conquered?

This is most likely the picture Paul had in mind when he wrote his second letter to the Corinthians. As glorious as it is, I'm guessing Christ's triumphal procession will put Pompey's - and Obama's - to shame . . . and nobody will be whispering in His ear that He is only human and all this will pass.
Posted by Arnold at 09:19