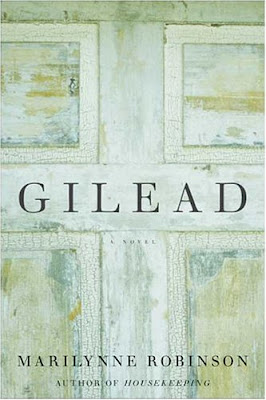 Maybe recency has something to do with it, since I read this book in November and finished another of the author's books only two days ago, a parallel novel to Gilead told from a different point of view. It's not just recency, however, that makes this book my favorite.
.
Someone else likes this book, too. Gilead won the Pulitzer Prize and the National Book Critics' Circle Award. A London Times columnist has called Marilynne Robinson "the world's best writer of prose," adding, "I'm not saying you're actually dead if you haven't read Marilynne Robinson, but I honestly couldn't say you're fully alive."
.
Fully alive. An ironic way to talk about a quiet book that starts and ends in the small town of Gilead, Iowa, rarely wanders far from the front porch, and includes a cast of characters that would comfortably fit in a minivan. If minivans had existed in the 1950s.
.
Gilead is ... What is Gilead? For being such a short book, it's difficult to summarize. Transgression, forgiveness, generations, sin, mortality, love, light, water, touch ... Any statement about this book would beg for more context and detail. But here's a try:
.
Rev. John Ames (Congregationalist and Calvinist) is in his 70s and slowly dying of a heart ailment. His first wife died young. He married his second wife only a few years ago; she's much younger and they now have a seven-year old son. Ames doesn't expect to be around to see the boy grow up, so he's decided to write the family history and share as much of himself as a 50s-era Midwestern minister can bring himself to do.
.
The book, then, is Ames's memoir to his son. And it is much, much more. It is a beautiful testament of a man who has learned to live in the gentle rhythms of grace. A man who has steeped himself in the Bible and theology and life and come out on the other side wise and humble and a little bit funny.
.
There's so much to say about this book, but everything feels inadequate. Gilead is a book to read slowly and savor. It's not a book of plot, though there is a plot of sorts; rather, it is a book of character, told with style and with prose that simply amazes. Although not a "Christian" book, it is perhaps as Christian as any book you could read - and if you're not a Christian, you may not "get" it. And yet it is never preachy, never ponderous. Rather, this is luminous spirituality, the kind that draws us and leaves us thinking, "I'd like to be like this man. Perhaps I can."
.
Toward the end of the book, Ames writes, "Grace is not so poor a thing that it cannot present itself in any number of ways." Through Robinson's magnificent writing, I see grace in new ways. Perhaps you will, too.
.
You can read (slowly, please!) the first several pages here. Read, then place your order.