“Do you want to win, or are you more interested in your principles?” 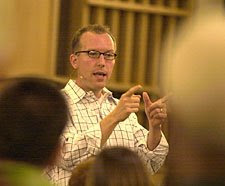 Tony Jones is a leader in the emergent church movement. He supports Obama for President. In a blog post of a couple days ago, he tells of a teleconference that he and seven other unnamed "Christian leaders" (his term) had with members of Obama's religious outreach staff.
Of course, the issue of abortion came up, and there was some disagreement among the eight "Christian leaders" as to whether Obama should tackle this head-on or try to do an end run. Some felt that if Obama jumps in, he's letting the religious right set the agenda. Jones writes:

The Five continued to protest, saying that abortion is not an issue that O should deal with much. To which I replied, “Do you want to win, or are you more interested in your principles?”

Does anybody have a problem with that question?
We all know that politicians find ways to "shift" their positions in order to gain more votes. They could even be accused of changing their principles in order to win. But "Christian leaders"? Should they employ a similar approach to life?
The principles by which we live our lives define who we are. The principles by which Christians live their lives determine whether they are truly followers of the Jesus whom they claim. Fidelity to Christ and His kingdom must trump all other principles, wouldn't you think?
So when Bell asks, "Do you want to win, or are you more interested in your principles?", he is, in effect offering a conflicting principle: that winning is more important than integrity and fidelity.
Somehow, I see a tie-in with the emergent church movement. Doctrine, creeds, history, and dogma all fall to the wayside in the search for conversation, not conversion. I'm not sure what is won in the process, except a "good time had by all." Becoming all things to all men is a Biblical principle, but the driving force underlying it is that men and women would be won to Christ - not to conversation, coolness, relevance, or anything else.
.
Are we willing to stick with our principles, even if that makes us "losers"?
Posted by Arnold at 09:18