Abe Lincoln, the Religious Wacko Fundamentalist (and what it may teach us about Sarah Palin) 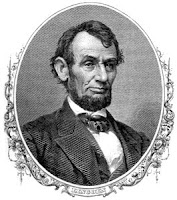 .
The ignorance of the press when it comes to religious matters is astounding. People of faith are too often treated as if they come from an alien planet and have habits normal mortals can never hope to understand. I've often referred to the GetReligion blog as an excellent site for cataloging much of this cluelessness - and pointing out the praiseworthy exceptions when they do occur.
Sarah Palin is being pilloried by some who see her as a Christian incarnation of a Muslim fundamentalist. And this is in the mainstream media. See, for example, Juan Cole's column on Slate.com.
One Palin comment raising eyebrows came in her address to graduating students at her former church, when she said, "Our national leaders are sending them out on a task that is from God. That's what we have to make sure that we're praying for, that there is a plan and that plan is God's plan."
Now, every "normal" evangelical, especially those who listen to the message in context, will understand her to be saying that our leaders should ask for God's guidance as they make decisions about (the) war, and that every citizen should beseech God to guide those leaders. Praying for our leaders is, in fact, a Scriptural injunction (see, for example, 1 Timothy 2.1-3). But the rigid secularists see her as claiming divine mandate for every decision that she might make. Then they take it even further and warn that she may singlehandedly attempt to usher in the Apocalypse in order to hasten the return of Christ. I'm sure such religious wackos do exist, but there's no sane reason to believe that Sarah Palin is one of them.
Somehow, this leads to Abraham Lincoln. I was remembering how he said that we should "do right, as God gives us to see the right," and how that statement wasn't much different than Palin's. And that got me to looking at Lincoln's second inaugural address. It's only 700 words long - if only today's political speeches were so short! - and the most notable aspect is that almost 2/3 of it reads like a sermon. I'll reprint that portion below. There's more theology in this civic address than I've heard in a lot of sermons. What was Lincoln's view of God's will? Of divine Providence? Of prayer? Of the attributes and character of God? Is this the kind of relgious wacko who should be entrusted with leading a nation at crisis?

Neither party expected for the war the magnitude or the duration which it has already attained. Neither anticipated that the cause of the conflict might cease with or even before the conflict itself should cease. Each looked for an easier triumph, and a result less fundamental and astounding. Both read the same Bible and pray to the same God, and each invokes His aid against the other. It may seem strange that any men should dare to ask a just God's assistance in wringing their bread from the sweat of other men's faces, but let us judge not, that we be not judged. The prayers of both could not be answered. That of neither has been answered fully. The Almighty has His own purposes. "Woe unto the world because of offenses; for it must needs be that offenses come, but woe to that man by whom the offense cometh." If we shall suppose that American slavery is one of those offenses which, in the providence of God, must needs come, but which, having continued through His appointed time, He now wills to remove, and that He gives to both North and South this terrible war as the woe due to those by whom the offense came, shall we discern therein any departure from those divine attributes which the believers in a living God always ascribe to Him? Fondly do we hope, fervently do we pray, that this mighty scourge of war may speedily pass away. Yet, if God wills that it continue until all the wealth piled by the bondsman's two hundred and fifty years of unrequited toil shall be sunk, and until every drop of blood drawn with the lash shall be paid by another drawn with the sword, as was said three thousand years ago, so still it must be said "the judgments of the Lord are true and righteous altogether."

With malice toward none, with charity for all, with firmness in the right as God gives us to see the right, let us strive on to finish the work we are in, to bind up the nation's wounds, to care for him who shall have borne the battle and for his widow and his orphan, to do all which may achieve and cherish a just and lasting peace among ourselves and with all nations.