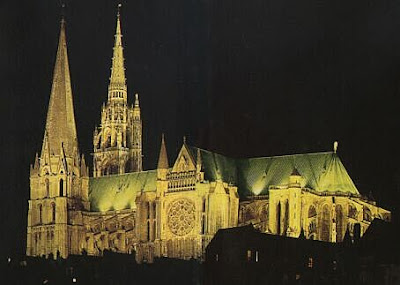 LifeWay Research finds unchurched prefer cathedrals to contemporary church designs
Written by Tobin Perry
NASHVILLE, Tenn.-- People who don’t go to church may be turned off by a recent trend toward more utilitarian church buildings. By a nearly 2-to-1 ratio over any other option, unchurched Americans prefer churches that look more like a medieval cathedral than what most think of as a more contemporary church building.
The findings come from a recent survey conducted by LifeWay Research for the Cornerstone Knowledge Network (CKN), a group of church-focused facilities development firms. The online survey included 1,684 unchurched adults – defined as those who had not attended a church, mosque or synagogue in the past six months except for religious holidays or special events.
...
When given an assortment of four photos of church exteriors and given 100 "preference points" to allocate between them, the unchurched used an average of 47.7 points on the most traditional and Gothic options. The three other options ranged from an average of 18.5 points to 15.9 points.
"We may have been designing buildings based on what we think the unchurched would prefer," Couchenour concluded. "While multi-use space is the most efficient, we need to ask, ‘Are there ways to dress up that big rectangular box in ways that would be more appealing to the unchurched?’"
"Quite honestly, this research surprised us," said Ed Stetzer, director of LifeWay Research and LifeWay Christian Resource’s missiologist in residence. "We expected they’d choose the more contemporary options, but they were clearly more drawn to the aesthetics of the Gothic building than the run-of-the-mill, modern church building."
Stetzer suggested that the unchurched may prefer the more aesthetically pleasing look of the Gothic cathedral because it speaks to a connectedness to the past. Young unchurched people were particularly drawn to the Gothic look. Those between the ages of 25 to 34 used an average of 58.9 of their preference points on the more ornate church exterior. Those over the age of 70 only used an average of 32.9 of their 100 preference points on that particular church exterior.
The Gothic style was preferred by both unchurched Roman Catholics and unchurched Protestants, according to the survey.
...
"I don’t like modern churches, they seem cold," said one survey respondent who chose the Gothic design. "I like the smell of candles burning, stained-glass windows, [and] an intimacy that’s transcendent."
...
"Buildings don’t reach people, people do," Stetzer said. "But if churches are looking to build and are trying to reach the unchurched, they should take into consideration the kind of building. Costs and other considerations will play into the decision, but the preferences of the unchurched should be considered as well."
...
The online survey was conducted on Feb. 4 and 5, 2008. The representative, national sample was controlled for a variety of factors including age, race, gender and region of the United States. The sample of 1,684 unchurched adults provides 95 percent confidence that sampling error does not exceed 2.4 percent for the total sample.

The original, unabridged article can be found here.
.
Posted by Arnold at 08:40