Ein Feste Burg, And All That Stuff. A Favorite Painting - Cranach in Weimar 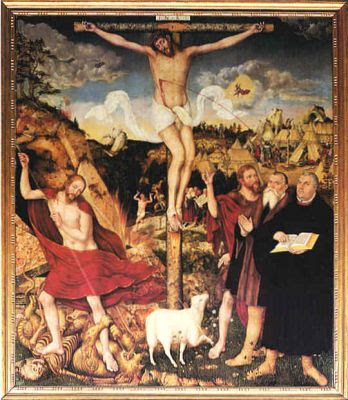 I've posted so many things sympathetic to the Roman Catholic and Eastern Orthodox church that some of my Presbyterian friends may be questioning my bona fides. But as John Paul II would say, "Do not be afraid!" Perhaps this post will help to reestablish "(w)here I stand."
.
This post is an attempt at art appreciation. I freely admit that I am a marketer, not an artist, so if you happen to notice flagrant ignorance, please feel free to correct me (gently).
.
I've been working on this blog post off and on for many months, and it is very long, so you may not want to try to read it all at one sitting. The pictures are nice, though, so I hope that will be enough to entice you to come back a few times and read the whole thing.
.
I suppose there's a handful of paintings I'd call my "favorite," but if I had the opportunity to take one, and only one, with me into exile, it would be Cranach's magnificent altarpiece triptych which can be found in the Herderkirche in Weimar, Germany.
.
I have a special relationship with this painting. In my missionary days, when working in communist East Germany, we would have discipling meetings with the youth pastor and his wife in Weimar. His window faced the Herderkirche across the square, and I attended services there a few times (plus once afterwards, on a return visit years later). I also was able to hear some organ concerts there during the summers. Bach himself attended this church for a time, and a couple of his kids were baptized here. By then, the painting was about 150 years old, but the organ is a much newer affair, so it's not one he played.
. 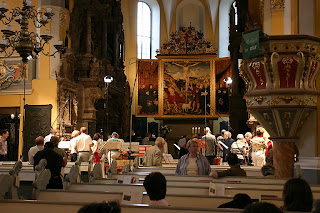 So during these services and concerts, I got to spend a lot of time looking at the painting. Maybe that's part of why I like it so much - that, plus the winsome way it portrays the salvation of the donors, the viewer, and the artist himself. I've even been up on the altar for a closer look, and have walked behind this work to see the other side (I think there's something painted on the back, too, but that's where memory fails me - probably it's just decoration for when the triptych is "closed"). 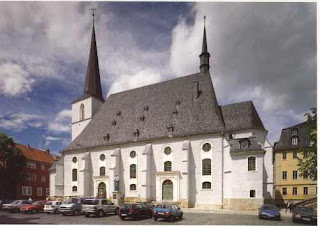 The church goes by several names. In addition to Herderkirche (named after a German poet and philosopher of the Romantic period, whose statue now stands before the church), it is sometimes referred to as the Stadtkirche (city church), though its "official" name is the (Lutheran) Church of St. Peter and Paul. It was built between 1498-1500 and largely rebuilt after heavy damage sustained in WWII bombings.
.
Though the church was originally Catholic, it became Lutheran during the Reformation, and barely twenty years after the Reformation reached Weimar, Lucas Cranach the Elder (1472-1553) was commissioned to paint this altarpiece. By that time, he and Luther had become friends, even godfathers to each other's children, and he had printed "Luther Bibles" on presses he owned. Cranach painted numerous portraits of Luther (and Luther's wife, Katie) over the years, becoming a sort of "painter of record" for Lutheran reformers. However, Cranach was multi-vocational: in addition to his painting and printing businesses, he owned a pharmacy in his town of Wittenberg (where Luther posted his 95 Theses) and served as mayor for a time.

Although the Calvinistic Reformers made a point of eliminating anything in a church that could be taken to be a "graven image" - statues, paintings, stained glass - not so Luther. He realized that every time someone hears a Bible story, he forms a picture in his mind of what that might have looked like. And if every hearer of the gospel has an image in his mind, "Why then should it be sinful to have it before my eyes?" As long as images were only reminders or teaching tools and not thought to be of intrinsic value, they were welcome. 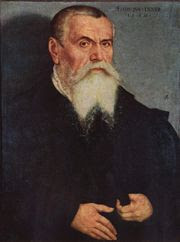 So Cranach got to work at producing what's been called a work of "evangelical iconography." But he wasn't able to finish the painting before an exile from Weimar of about 5 years following the capture of his prince in a mini-war with the Catholics; he did return in 1552 after the Protestants returned to power, but died only a year later. His son, conveniently named Lucas Cranach the Younger (1515-1586), completed the work his father had begun. The portrait of "The Elder" which you see here was painted by "The Younger" in 1550.

The major donors for the painting were the leader of the Protestant Union, elector Johann Friedrich der Grossmutige, and his wife. Johann Friedrich is the aforementioned prince who was held captive from 1547-1552. Husband and wife are in the left wing of the triptych and their three sons are in the right wing, all of them praying toward the center painting. 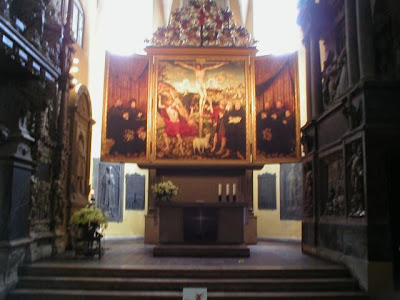 The focal point, of course, is the remarkable center painting. Perhaps not remarkable for its artistry or technical sophistication (one commentator refers to its "dispiriting didacticism"), but for the theology and piety and immediacy that preach the Gospel in paint.

You can get a nice close-up of the painting on this site, but turn your volume down first to avoid the loud MIDI file. Click on the various figures you see there, or the directional hands below the painting, and you'll see even more detailed views. Alternatively, just keep reading, because I've reproduced those detailed views below (click on each figure to see a larger version) . . .

Adam is driven from the Garden of Eden by fantastical creatures. The skeletal figure doing the prodding I take to be "death," but I'm not sure what to make of the club-wielding figure, which looks like a chicken with breasts.

Adam is moving along at a pretty good clip. Eve, however is nowhere to be seen. It was Adam's sin that made Christ's sacrifice necessary. 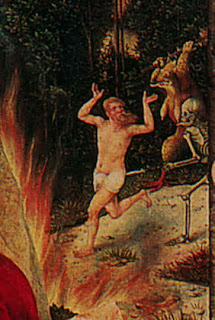 This is presumably Moses presenting the Decalogue to the Israelites. As we'll see later in the depiction of Luther, one foot is pointing into the painting and the other is pointing outward to the viewer - us - as if to remind us that the Law was given not just to the Jews, but to all humankind. The Law, as an expression of God's perfection, shows us our imperfection, indeed, our total inability to live up to God's standard. 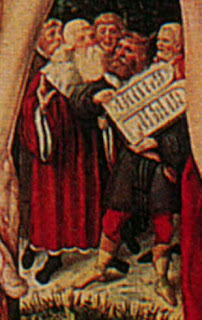 The Snake in the Desert

Numbers 21.4-9 tells of the wandering Israelites who complained about their desert experience and were bitten by poisonous snakes. God instructed Moses to hang a bronze snake in the camp. Anyone who looked at it would be saved. This is a prefigure of Jesus, who will save all who look to His saving work on the cross.

The snake will be mentioned again, in the "Trio in the Triptych" section below.

Notice that the flow of blood from Jesus' side courses through the middle of the camp. 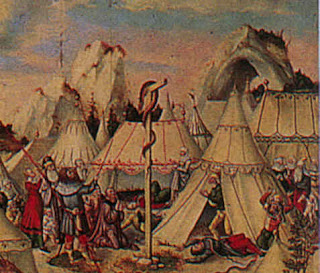 The shepherds receiving news of the birth of Jesus. 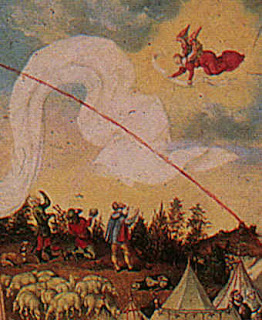 Here, Jesus' blood flows above the shepherds, but below the angel, reminding us, perhaps, that humans need salvation, but angels do not.

Jesus is the sacrificial Lamb of God, who takes away the sin of the world (John 1.29); the almost invisible banner at the top of the staff he carries bears this message in Latin . This Lamb is also a warrior, however (see Revelation 17.14, for example), meaning we can take the banner to be a battle flag. 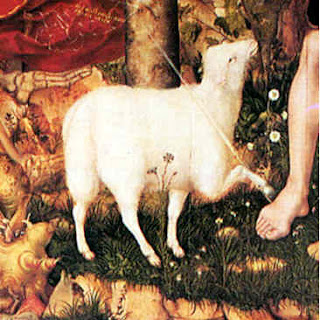 The area where the Lamb stands isn't the only place in the painting with vegetation, but it appears to be the only spot where things are blooming. The Lamb of God brings new life. 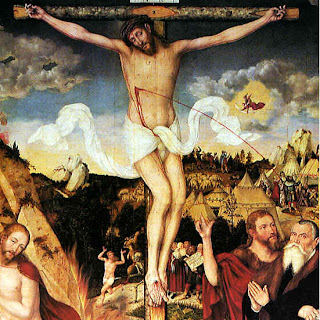 This is where I wish I knew more about art. I suspect Cranach had something in mind when he painted Jesus' head listing to the right, put bark on the wooden crossbeam, and showed only the very bottom of the placard that proclaimed Jesus "King of the Jews." The flowing white loincloth suggests something to me about Christ's divinity and the breadth of the salvation He was purchasing by His death.

John 19 tells us that a Roman soldier stabbed Jesus' side with a spear in order to make sure He was dead. Water and blood flowed out. The next section talks about where that blood goes.


Justification - The Trio in the Tryptich

John the Baptist points with his right hand to Christ on the Cross, and with his left hand to the Lamb. John and Jesus have remarkably similar faces, perhaps because they were cousins?

Martin Luther holds the Bible, which he had recently translated into German. On the page are three verses, the first of which he points to:

Luther's left foot points outside the painting, perhaps signifying that his is a missionary message, not one to be limited to personal piety.

Between John and Luther stands the painter, himself, Lucas Cranach the Elder. This is an unusual touch, made all the more unusual - and remarkable - by the flow of blood that springs from Jesus' side and lands right on Cranach's head. Through this, Cranach declares his own devotion and need for atonement, and bluntly asserts that this atonement is not mediated through priest or church. The religious message about salvation is not just abstract theology, but practical necessity, and that's why Cranach needs a "straight shot" of the blood. As the only character who looks beyond the painting to the "audience," he seems to be inviting us into the painting to share with him in the benefit of Christ's blood. 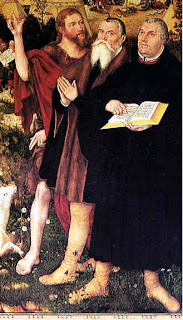 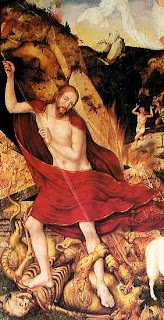 His translucent spear (staff?) looks a lot like the translucent staff that the lamb is carrying, and it's held at about the same angle. The skeletal Death looks a lot like the figure that chased Adam from Paradise. I take the lion-like creature to be sin (Genesis 4.7) or Satan (1 Peter 5.8). Notice the snake near Jesus's right knee, just in case we miss the allusion. Notice also that Jesus's red cloak flows under the Lamb's banner which proclaimed him the Lamb of God who takes away the sin of the world - just in case we missed the connection.

Jesus has a fairly nonchalant look on His face as he gazes out of the picture, as if to show that this battle over sin, death, and Satan wasn't much of a contest. It was a lifesaver for us, but there was never any question as to the outcome. As Luther wrote in his most famous hymn:

The prince of darkness grim --
We tremble not for him;
His rage we can endure,
For lo! his doom is sure --
One little word shall fell him.

And so we see, in this one painting, a view of Creation, Fall, and Redemption. Cranach invites us to view this as participants in the timeless story, however, and not mere onlookers.

"God made Him who had no sin to be sin for us, so that in Him we might become the righteousness of God" (2 Corinthians 5.21).

The following sources were helpful as I prepared this analysis: