There Are No Atheists 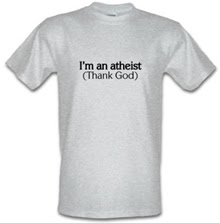 I continue to keep up with some of the leading atheist blogs, but over time a few things have become apparent:

According to the Bible, humanity's basic sin is not atheism. It is idolatry. In this perspective, all people have their god. It is either a god (or gods) that they have made or others have inflicted upon them, which they command and control; or it is the God who made them, whom they are commanded to worship and obey for their own good. In this view, there are no atheists, but only idolaters.